See the Northern Lights in Lapland with SNO®

Seeing the Northern Lights is an incredible, once in a lifetime experience. Whether you’re snug in the back of a husky-drawn sleigh or cosied up in a glass-roofed igloo, a glimpse of nature’s own fireworks is one of those truly magical moments you’ll be hard pushed to forget.

Lapland’s a super destination to go in search of the Northern Lights – AKA aurora borealis - as the area has some of the best viewing conditions on earth: long winter nights, next-to-no light pollution and a whole host of activities to make a sighting even more spectacular. 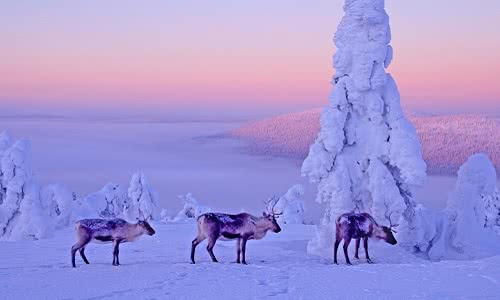 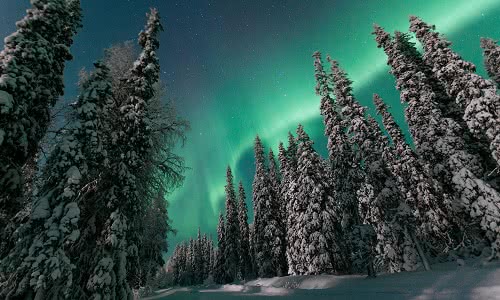 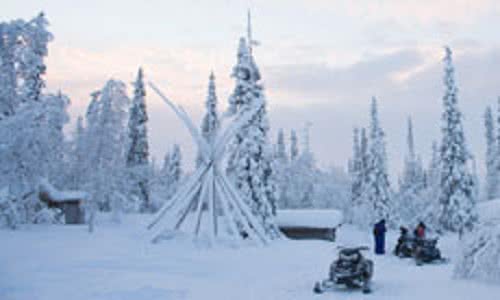 What are the Northern Lights?

Also known as the “aurora borealis”, the Northern Lights are a dizzying display of nature’s power. They appear as light phenomena in the night’s sky at the northern and southern extremities of the earth and every appearance is unique - taking the form of a hazy glow, arcs or “curtains” (groups of parallel streams of light that wind across the sky).

Sometimes the lights seem motionless while on other occasions they’re constantly changing, weaving and pulsating before your very eyes. Formed about 100km above the Earth’s surface, the intensity can vary but at their most luminous they’re able produce the same amount of light as a full moon. The most common colours to see are greens, yellows and reds but all colours of the spectrum can appear including pinks, blues and violets.

Although most people think the Northern Lights only happen at night, they’re actually present throughout the day but just aren’t powerful enough to be visible in sunlight. These magnificent auroras aren’t just limited to our planet either and have been witnessed on many other planets and moons in the solar system.

Where are the best places to see the Northern Lights?

The Northern Lights appear above and around earth’s North Magnetic Pole, in an oval band shaped by the magnetic fields. This band covers parts of North America, Iceland, Siberia and Scandinavia, including Lapland.

Inland areas tend to be the driest and so the most likely to have clear skies, which makes our Lapland destinations the perfect places to try and see the lights in all their glory - as they’re all in central Finland, while being far north enough to be in the peak aurora spotting zone.

For the best chance of seeing the Northern Lights, it’s best to spend at least a week in the area, allowing for possible cloud cover and other factors which may affect the appearance of the Lights.

Legends of the Northern Lights

Throughout history, this amazing phenomenon has inspired all kinds of mythological explanations and legendary folklore, including ancient heroes battling in the sky, the souls of the dead and old maids dancing...

The Finnish name for the Lights, “Revontulet”, translates as “fox fire” and comes from an old belief that they were caused by a fox that runs across the snow and throws sparks into the sky from his bushy tail.

The Sami people call the Northern Lights “Guovssahas”, which means "the light which can be heard", as many claim that the auroras often produce sounds similar to hissing and crackling. Scientists have never managed to prove this although it’s thought that you have to be in some of the most remote areas, far away from any other noise pollution.

As if you needed more convincing to visit Lapland to see the Northern Lights, an old Asian belief states that someone who manages to see them will live happily ever after. But beware – anyone who disrespects the lights brings years of bad fortune upon themselves!

What causes the Northern Lights?

Put simply, the Northern Lights are the result of an energetic interaction between charged particles from the sun and the Earth’s atmosphere.

The sun emits something called solar wind (not like the blustery wind we’re used to but electrons and protons that are thrown out at speeds of up to 750km per second). The Earth’s magnetic field, the magnetosphere, directs the majority of these electrically charged particles around the planet, saving life from its harmful radioactive effects. Some of them, however, are not deflected and are focused towards the Earth’s poles where they collide with molecules in the upper atmosphere, about 100-400km above the surface. The energy formed by these collisions is released as visible light, in much the same way as TV screens or fluorescent lamps, which cause the spectacular scenes that we associate with the Northern Lights. The colours displayed depend on which molecules are hit and at what height. The green and red glows are the result of oxygen, while blues and violets come from nitrogen.

At the end of the day, no scientific explanation can fully convey the stunning beauty and majesty of the Northern Lights - this can only be experienced and appreciated first-hand.

What is the best time of year to see the Northern Lights?

Around the equinoxes (September and March), the lights are at their most active and the weather tends to be at its calmest. The winter months in-between have the most amount of darkness at night, when the lights are at their clearest, so this is longest window of opportunity to see them. Weather is a significant factor as clear skies are evidently necessary to be able to view the lights properly - clouds are the Northern Lights hunter’s nemesis! Most sightings are reported between 6pm and 2am and it’s important to stay out for a significant period of time as they might only appear very briefly and without warning.

One of the most crucial factors is to avoid as much light pollution as possible, which is why Finnish Lapland is such a superb place to see them. Most of the area is wilderness and in some resorts, they turn off all streetlights after 10pm so as not to interfere with potential sightings. There are all kinds of activities to take you out of the towns in order to get the best views, from husky, reindeer and snowmobile safaris to remote saunas and hot tubs. Check out our Northern Lights excursions for some great ways to get the most out of your experience.

There are all kinds of activities and excursions to get stuck into around Lapland, which are not only great fun but also give you the best opportunity to catch sight of the Northern Lights during your time there.

Light pollution can really affect the chances of seeing the aurora so there are lots of enjoyable and relaxing trips to take you away from civilisation and into the stunning, secluded wilderness. From snowmobile, husky and reindeer rides to remote log cabins and glass-roofed igloos, there are plenty of ways to get the adrenaline pumping, totally unwind or simply keep warm while you enjoy this once in a lifetime spectacle in style.

You’ll be able to arrange some trips with local companies while you’re in the resort and often we can arrange things for you in advance, ask us what we can help you book to get the excitement brewing!

Zoom across the snowy Lapland landscape as you drive your own snowmobile and leave the lights and noise of the resort behind in search of the elusive Northern Lights. You can usually enjoy hot drinks and campfires as you soak up the magical atmosphere while hopefully marvelling at the scenes overhead. Just remember to wrap up warm!

As darkness falls, it’s often possible to climb aboard a sleigh and look after your own team of huskies as you fly across the snow, through dreamlike forests and over frozen lakes. If the clouds stay away, you should be able to take in the spectacular Northern Lights illuminating the skies and the snow while the pack takes a well-deserved rest.

This traditional mode of transport has been used by the Sami people (and Santa!) for hundreds of years and is terrific for a relaxed and authentic journey through the untouched Lapland wilderness. On most rides, you can have the choice between driving the sleigh yourself, or simply curl up in the back and enjoy the view from under a warm blanket. Within minutes it feels like you’re one of the very first explorers, far away from the nearest towns and up close and personal with nature in its purest form.

A popular way to experience the lights is to take a night trek on snowshoes where you can walk effortlessly over thick snow without sinking. As you walk amongst the forests and wildlife (you’re more likely to see reindeer than people out here), you’ll have never felt closer to nature. During a hard-earned break, warm up with a hot drink and if the conditions are right, hopefully enjoy the breath-taking Northern Lights.

For a totally unique and unforgettable experience, spend a night in a glass-roofed igloo staring up at the stars and, hopefully, the Northern Lights. These amazing, atmospheric constructions are the perfect place to lie and watch the lights dancing in the skies above, while staying protected from the cold outside. If you want to try the real arctic experience, you can sometimes spend the night in an authentic snow igloo and snuggle up in a thick sleeping bag while the temperatures plummet outside but remain constant inside.

For something a little more leisurely, try out the long-standing tradition of ice fishing and have a go at catching your own dinner and cooking it under the stars. Head down to one of the beautiful frozen lakes where on most trips, your guide will show you how to cut a hole in the ice and lower your bait into the arctic waters below. While you wait for that heartening tug on the line that lets you know you’ve made your first catch, let your eyes wander to the panoramic skies above and with any luck the clouds will stay away so you can enjoy the stunning displays of the Northern Lights.

Are there northern lights in Lapland?

The Northern lights can be seen in Lapland. However, your chances of seeing the amazing natural phenomenon cannot be guaranteed.

Where can you stay in Lapland to see northern lights?

It is highly unlikely that you will see the Northern lights in a town full of light pollution. Your best chances of seeing the Northern Lights from your accommodation would be to book an overnight stay in an Igloo or a Cabin in a secluded area away from man-made light sources. Or book a northern lights excursion in Saariselkä, Levi and Yllas.

Can you see the northern lights in Lapland in December?

You can get lucky and see the Northern Lights in December. The Northern lights being visible relies on several factors, one of the most important being cloud cover. Another vital factor is staying away from man-made light pollution, so be sure to book as many outdoor excursions as possible to increase your chances.

When is the best time to see the northern lights?

In Lapland, you can see the Northern lights on a clear sky on average every other night. They can be out anytime from 7 pm-3 am. We would highly recommend downloading an aurora alert app onto your smartphones which can send you a notification when the lights are out in your specified area.

Can you see the northern lights in Levi?

Yes - Levi is situated within the Aurora belt as you are in Northern Finland, on average the lights can be seen in Levi 200 nights a year. Cloud cover and man-made light pollution can decrease these chances, so be sure to spend as much time away from the main town on as many excursions as possible.

Can you see the northern lights in Rovaniemi?

Yes – Rovaniemi is known as one of the best places in Lapland to see the Northern lights. Be sure to increase your chances of seeing the lights by booking night-time excursions that go in search of the lights.

Can you see the northern lights in Yllas?