The attractive town of Malcesine was made popular by Goethe’s Journey to Italy where he praised the towns beauty and spent days painting its impressive Scaligero Castle. In his work he writes, ‘I could have been in Verona tonight but there was still a magnificent vision of nature nearby that I did not want to miss - the delicious spectacle of Lake Garda - and I was amply rewarded for my detour’. After Goethe many artists from the romantic age travelled to Malcesine to find inspiration from its beauty.

History originated in the area in Etruscan era of 500 BC before passing in to the hands of the Romans after 15BC, evidenced in excavations of Tombs containing terracotta pieces and bronze coins in the area. After the fall of the Roman Empire the town came under the rule of the Lombards who initially fortified the town with the Malcesine castle. In 1154 it became an independent city-state with the right to make its own laws before passing over to the Della Scala family in 1277 who cemented their name on the imposing castle after extensive renovations. From the 15th to the 18th centuries the town was governed by the republic of Venice who set up the ‘Gardesana dell’Acqua’- the authority of territorial control. It was part of the Austro-Hungarian Empire during their period of dominance and after the third war of independence the town became part of the Kingdom of Italy.

The striking Scaligero castle gives Malcesine a medieval-fairy-tale feel as it stands over the town. Originally built as a fortification for the town by the Lombards the Castle was taken over by the Della Scala family in the 14th Century who re-fortified and reinvented. In 1902, after the rule of the republic of Venice, the French and the Austrians, it was declared a national monument. The basement and ground floor now houses the Museum of Natural History which showcases information and artefacts about the surrounding natural landscape such as the lake and Mount Baldo. The Castle also has a hall dedicated entirely to the artist Johann Wolfgang Goethe displaying some of his artwork of the castle. 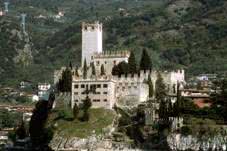 ‘The Palace of the Captains’ was built in the Della Scala era at the end of the 13th century and was the headquarters for the captain of the lake. The palace was destroyed and rebuilt in 1477 by Alexander Miniscalchi who designed the house in Venetian style decadence. Inside there are a number of beautiful frescoes, such as the representation of the Rocca di Malcesine and lion of St. Mark in the entrance, as well as the coat of arms of Verona.

Standing today in 18th century baroque design, this religious building has been a place of worship for a number of centuries. The church dates back to a place of Christian worship for the franks and now holds the remains of two local saints.

History in Resorts Near Malcesine