Set among olive groves and pine trees, the old fishing town of Torri has roots dating back to the Palaeolithic age with the discovery of rock carvings on Mount Baldo. The layout of the town is evidence of an ancient settlement, its shell shaped harbour signifying Roman inhabitants. In the 10th century King Berengano encased the town in walls and the remains of these can be seen today. The 15th century saw rule under the Republic of Venice, and in this period it became the headquarters of the Gardesana Dell’ Acqua.

Over time poor trade roots meant a struggling economy for the town and many living here were forced to leave. It was only in the 1920’s, when the Gardesana road was widened that the economy began to take off and like many surrounding towns, tourism predominantly began after the Second World War.

The narrow, cobbled streets give charming character to the old part of the town making it one of the prettiest in Lake Garda. It was visited by the poet Andre Gide in 1948, he grew to love the town and wrote ‘the marvellous memory I hold so dear will give me the strength to endure the long winter’. 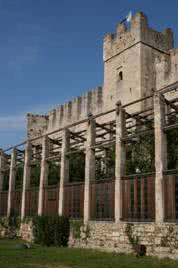 In the 10th century the King Berengar I of Italy encircled the town in a fortress of walls in order to protect against invasion from the North. The castle was re-built by the Della Scala family in 1383 giving the castle its name today. In the 18th century part of the castle walls were knocked down to make way for a citrus grove and from this period the castle lost its significance as a fortification.

In the 1980’s a museum was established within the castle. This museum is still open to the public and exhibits artefacts from numerous eras of history. The hall of the petroglyphs displays the rock carvings found on Mount Baldo which date the towns dwellings back to the pre-historic period.

Church of S. Pietro and S.Paolo

This 18th century baroque style church has some exquisite marble altars as well as some valuable altar pieces. It is now a war memorial dedicated to Italian soldiers who have died in combat.

The Palazzo della Gardesana sits at the Northern end of the old port. Built in the 15th century, the building once housed the seat of the ‘Gardasana dell’Acqua’, a council set up to control smuggling within Lake Garda during the Venetian rule. It is now a luxury hotel and restaurant.

History in Resorts Near Torri