Peschiera, the ‘ Strong and Fair Fortress’ named in Dante’s inferno, is surrounded by a fortification of walls built in the 16th century as a defensive strategy by the Venetian Republic. Such remains are telling of the continuing conflicts that the many towns around the lake were subjected to through the centuries. It became part of one of the most powerful defensive systems in Italy under Austrian rule as one of four fortresses and the location has ensured the town as a centre for trade and communication, marking its significance in the Italian Risorgimento movement and the First World War.

Artefacts and remains such as arrow-tips and swords have been found dating the charming town of Peschiera back to the Bronze Age. Further literary and archaeological findings are evidence of Roman inhabitants who originally named the town Arilica. The Lombards then called the town ‘Piscaria’ due to the abundance of fish in the surrounding lake which. The Old centre is entirely surrounded by water, its narrow streets giving a unique sense of what it would have been like in renaissance Italy. 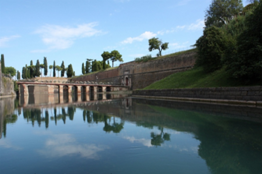 A document from the 11th century makes S. Martino church one of the oldest in the province of Verona. It was made in to a hospital and military warehouse under French rule at the end of the 18th century and rebuilt in 1822.

This building is one of the most important in the town of Peschiera and now holds a museum dedicated to years of the Italian war effort. On display is a number of relics and information about the Risorgimento movement under King Vittorio Emmanuelle III. It also showcases a number of military equipment, weapons and photographs of the Great War.

This Sanctuary is important in the religious history of the town and is still visited every year by thousands of pilgrims. Legend has it that in the year 1510, a farmer named Bartolommeo Broglia was on a path back to his farmhouse when he came across a snake. Scared for his life, the farmer fell to his knees and looked to the heavens where he saw a statue of Madonna surrounded by light. He took the statue back to his home and locked it away as a treasure, when the town heard of this miracle they came to see it but on opening his drawer the farmer found that Madonna had disappeared. On returning to the spot where the miracle had happened, he found the statue of Madonna in the ash tree. It was here that this sanctuary was built in memory of the miracle of Madonna.

At the height of the Roman Empire, Spectacles of entertainment became an expression of Rome’s immense power. The site of the amphitheatre at Verona, just a half hour drive from Peschiera, is an example of Roman display of empire. Gladiatorial battles put on by the emperor would have been held here to entertain the people of the town.

History in Resorts Near Peschiera