Originally a Roman settlement, the idyllic town of Maderno has been important in the economic history of Lake Garda. From the 9th to the 14th century the administrative centre of the lake was stationed here before moving to Salò. During this period the town held a large amount of power over the west shores of Lake Garda and obtained special privileges from the German emperors Otto I and Frederick Barbarossa, becoming the seat of the Magnifica Patria

In the 14th Century the town came under the Della Scala rule and since then Maderno has been integral to the production of paper and this has been a major source of economy for the town. This industry also saw the establishment of the famous Paganini brother’s print shop where editions of Latin classics were re-printed in the 16th century. It was the town’s prestige that brought Gonzaga dynasty to hold its summer residence here, the family built several of the palazzo’s in the town.

Valley of the paper mills

Due to the excellent quality of the paper in Maderno the industry has flourished since the 14th century. The paper was taken across Lake Garda to Verona and from here was moved down the coast to Venice to be sold. The integral paper industry made Maderno a famous industrial centre in Italy. Starting in the centre of Maderno visitors can follow the paper mill route to learn about its history, the remains of old warehouses offer an especially interesting insight in to the production. 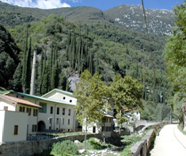 Well preserved churches in the town offer a view of the different eras of history surrounding the area. S. Giovanni church is a 12th century Romanesque style building which holds several shrines and sculptures from the Lombard Period. The 18th century S. Andrea Parish church also holds some valuable paintings. The Sanctuary of the Madonna Del Benaco distinguishes the religious culture of the town. The interior of the 14th century building is adorned in paintings and sculptures.

History in Resorts Near Toscolano Maderno