On entering the town of Limone, Goethe notes the famed view that still distinguishes the town today – ‘beautiful, lush, terraced gardens of Lemon trees. Famous for its expanse of lemon groves, the small town is not actually named after the citrus fruit that grows so fruitfully in the area but the name actually derives from the Latin word ‘Limen’, meaning border. It was only accessible by boat for a number of years and so the town remained fairly insular and its location, surrounded by mountains and water, has led to its economy being based on fishing, olives and, extensively- lemons.

Limone exudes an authentic Italian feel. It has moved through numerous eras of rule, the Venetian republic, the Austro-Hungarian Empire and the Italian renaissance and is full of charming historical sites such as Old Fisherman’s houses, Religious buildings dating back through to the Middle Ages and museums offer an insight in to the town’s history.

Even though the name of the town doesn’t derive from the fruit, Limone is known as the land of the lemons. Lemon groves were introduced to Lake Garda in the 14th century and the trade flourished in Limone until competition from the south hindered production in the North. Today, entering the town you will notice The Limonaie, the old lemon houses- used to shelter the lemon trees in the winter months.

This Citrus garden sits in the centre of Limone’s historical town and is a well preserved display of the architecture and history of the groves in the town of Limone. Columns and walls of the Castel are a reminder of the extensive Lemon growth in the town that was integral to its economy and trade for a number of years.

Villa Boghi Lemon House is another example of a traditional Lemon house. Built in the early 20th century, the grove has seven plots and details the growth of lemons and their importance in the town’s history. 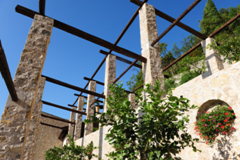 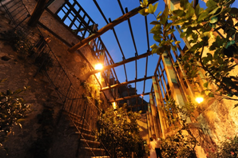 An interesting piece of medical history also surrounds the town, a discovery made in 1979 indicated that the local people of Limone had a unique protein in their blood called Apolypoprotein which protects against arteriosclerosis and heart disease. The discovery was made when a railway employee, who was born in Limone, was hospitalized after a routine check-up in Milan, with high cholesterol but no symptoms. Doctors were amazed by their find and further tests revealed many in the town with the gene- seemingly descended from one couple of blood relatives. Up until 1931 Limone was only accessible by boat and so families extended predominantly within its walls. This discovery led to further hopeful medical tests by doctors against heart disease.

San Pietro church is one of the oldest places of worship in the area and inside contains some treasured frescoes from the 13th and 14th Century marking the deep history of the area.

San Rocco Church was built in the 16th century as an offering of thanks for the protection against the plague, and was dedicated to Saint Rocco for his visit to the town during the epidemic. The church was damaged during the First World War and was restored after the findings of a number of original 16th century paintings.

The Parish Church was renovated in the 17th century in place of an original 11th century building. Mass is still celebrated daily in this stunning building which holds a number of valued pieces of artwork dating back to the 16th century.

History in Resorts Near Limone