Lazise is given its name from the Latin meaning ‘place on the lake’. Named Lake Garda’s walled town, Lazise is encased in an authentic medieval feel, significant of its cultural background, its walls and castles dating back to the 10th and 11th centuries. A number of coins found in the area date the town back to the Roman era and the ancient Lasitium is an example of an ancient port from the period. The picturesque Old Town makes for a charming stroll, with its narrow streets full of character.

The town has been a place of military importance for a number of years beginning in 983 under the rule of emperor Otto of Saxony through to its station as the headquarters of the Italian fascist party. Many of the original sites have been built upon throughout the ages to extend the defence of the town against invasion. It was further fortified under the rule of the Della Scala family of the Scaliger era who built the arsenal that today stands as the historically important customs house. This set the town up as an important trading hub, overseeing the imports and exports of products such as olive oil, grain and textiles. The town was plundered by the German and French forces in the 18th century during the Austrian war for succession before it became part of the Kingdom of Italy after the third war of independence. 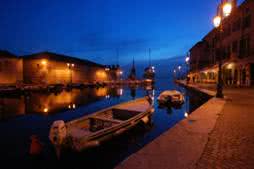 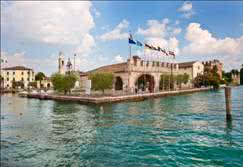 The Customs house has had a significant impact on the town of Lazise throughout the course of history, it was from here that Venice controlled Lake Garda’s trade for centuries. The original building was erected by the Della Scala family during the 14th century as an arsenal to enforce the defence of the town against the Hungarian invasions. In the 1600’s, the era of the Venetian Republic, the building was used as the customs house and became the main trading centre through which all goods were imported and exported due to its location on the ancient harbour. Later, Nitro-glycerine, a key ingredient in gun powder was made here. The house also acted as the ‘fascio del casa’- the fascist party base during the period of fascism in Italy and is now restored as a conference centre.

You can enjoy the fascinating exterior of this impressive castle from the view at Villa Bernini Park. Originating in the 9th century to act as a defence against the Hungarian forces, the castle has been reinforced throughout the ages to protect against invasion. The castle is a perfect example of 14th century architecture from the Della Scala era. The coat of arms is still visible on two entrances and marks out the ancient proverb of Lazise ‘The justice of the dragon punished he who is right’.

San Zeno church has its origin in a document dated 1295 and was dedicated to the patron saint of water and fishing. Renovations in the 18th century have secured the buildings standing today. Two significant pieces of artwork remain inside the building, the San Martino altarpiece dated 1828 and the via Crucis (1831).

S. Nicolo church is a 12th century church dedicated to the patron saint of school and seamen. Over the centuries t became a public house of worship, a store, barracks and even a theatre then cementing itself as a war memorial chapel. During the summer the locals hold Mass in the building.

This shipwreck lies 500 metres of the shore of Lazise on the muddy sea bed around 25 metres deep. Recent excavations have discovered that the vessel was sunk by the Captain of the lake, Zuane Moro, by loading it with stones and setting fire to it after the defeat of the Venetian troops at Agnadello in 1509.

Villa Pergonala originally stood as a 15th century monastery. In the 18th Century it was redesigned in renaissance style by James Franco in the Lombard era to resemble a castle. The villa is surrounded by luscious gardens which reach down to the shore of Garda. The villa Bernini was built in the second half of the 18th century and stands at the lake-side of Lazise encased by the ancient walls.

History in Resorts Near Lazise