The Winter Social Season in the Alps

The ultimate events to ski and be seen from SNO®

The mercury’s dropped, resorts have donned their winter coats and you’re en route to your Alpine second home. Hear that faint roar on the breeze? That’s just the crowd gone bonkers at the ‘winter Queen’s Cup’ in a valley yonder...

Doesn’t ring a bell? Not to worry, our guide to the biggest happenings on the hill is here to set you straight. Between ski races frenzied as Formula-1 finals, sports you wouldn’t believe work on snow and a whole new take on festivals, here’s what’s on in the winter.

The best events in the Alps 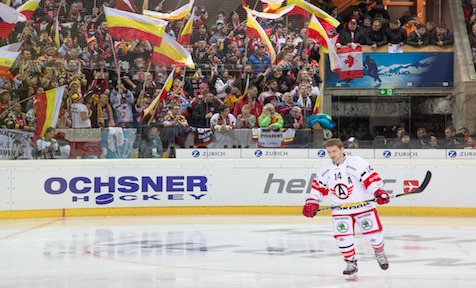 New Year’s parties are a dime a dozen in any given ski resort, but races between bow-clad piglets? Less so... In the royals’ favourite Swiss resort of Klosters, the ‘Hotch Race’, held every New Year’s Day will give you something to report back at the water cooler. Yet, this is but a distraction from the real reason crowds of 7000 come to the Landwasser valley for Christmas – the annual Spengler Cup at Davos. An Ice Hockey Championship might sound decidedly less Swiss, but having taken place since the twenties, is as tightly stitched into the Swiss fabric as yodelling men in shorts. The big question each year is ‘who can topple Team Canada?’. Don’t miss seeing whether Bacon or Rashers takes gold in your downtime. Usually held in late December / early January. Photo: Marc Berendsen. 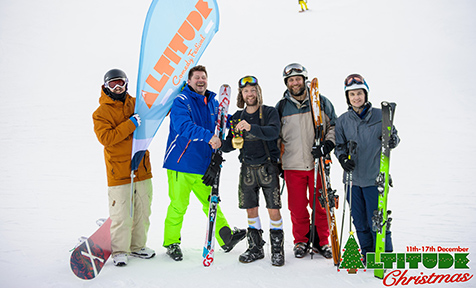 Skiing’s a laugh, no doubt about it. But come to Mayrhofen for Altitude Festival and you’ll have an absolute hoot. Andrew Maxwell and Marcus Brigstocke dreamt up the concept of a comedy fest in a ski resort over a decade ago and it’s been a roaring success. Ski through the day, then see your favourite comedians from Edinburgh Fringe, Live at the Apollo and the like do what they do best. Past performers include Sean Locke, Jim Jefferies, Kevin Bridges and the International Impro Allstars. Usually held in December or January. 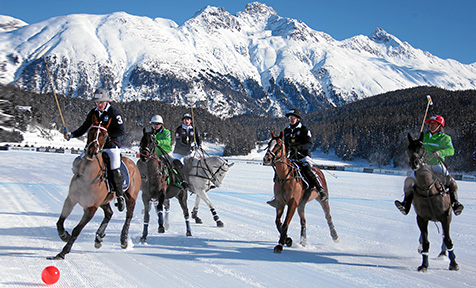 Winter’s answer to the Queen’s Cup has been drawing crowds to St. Moritz in the luscious Engadin Valley for over 30 years, with Kitzbühel joining the party in the last decade or so… And you still haven’t been? It’s inherently British - Churchill’s favourite, and Princes Edward, William and Harry play like professionals. Yet, the event also has a deliciously Alpine feel (put the fascinator away, pack the earmuffs). Entrance is usually free, but you can (and should) upgrade to Grand Stand tickets for canapés and champers at ringside. Usually held in January. Photos: Swiss-image & Andy Mettler, Michael Werlberger. 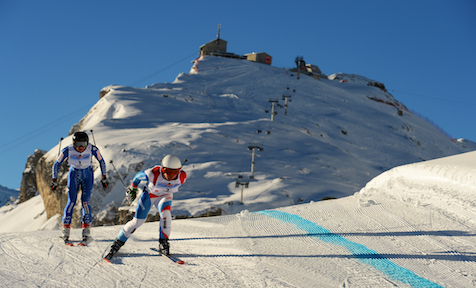 Ski-mad Brits began Murren’s Inferno Downhill in the 1920’s and ski-mad Brits ever since have kept it firmly on the skiing social calendar. From an original 20 competitors, today you’ll find up to 1800 going for gold on the 14.9km downhill (the world’s longest) and more besides having a go at friendlier races held throughout the week. Even if you prefer to just watch the competitions from a safe distance, a week of boozy lunches with the competitors and the all-out Inferno After Party are a good way to make up for a lacklustre New Year’s Eve. Usually takes place in January. Photo: Murren tourism. 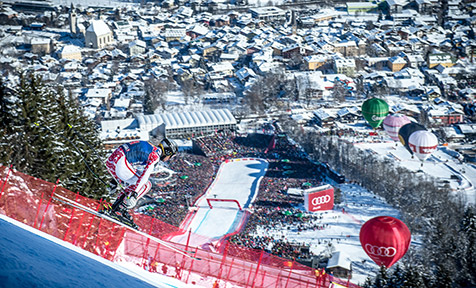 Breakneck races are like national holidays in ski country, and January is full of festivity of the ski race sort. The most terrifying of the lot, Kitzbühel’s Hahnenkamm, remains the most legendary. If you can’t (or won’t) ski it, cheer on the skiing greats instead as they breach speeds of 140km/hr and take hairpin turns at an average 100km/hr… Why oh why do they do it? Eternal fame, of course, and quite possibly the winnings (over half a million Euros on last count…). The sole thing steeper than the ridiculous runs (and that prize money) are the numbers of fans at base. Expect more atmosphere than a world cup footie final – and far less animosity. Everyone’s drinking to the fact they aren’t on the slopes… Usually happens in January. Photo: Michael Werlberger 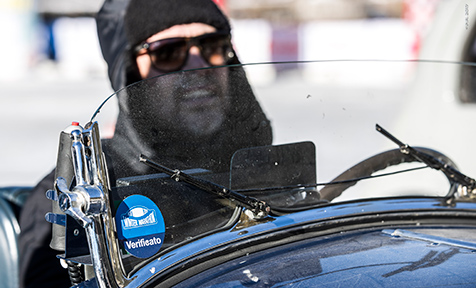 If the terms Corvette and Coupe get you hot under the collar, or you just have a thing for timeless glamour, you’ll feel Christmas has come again if you’re in Madonna di Campiglio at the end of Jan. The Winter Marathon annually draws over 100 classic cars for 12 hours of tightly-timed precision trials through the Dolomites’ biggest baddest passes. Don’t worry if you don’t happen to have a pre-1968 motor sitting around (the cut-off point for vintage vehicles according to the rule book). You don’t have to enter an engine to appreciate the atmosphere; plenty of eye candy of the vehicular variety, automobile aficionados everywhere and lots of lazy Italian lunches. Usually hosted in January. Photo: Madonna di Campiglio tourism. 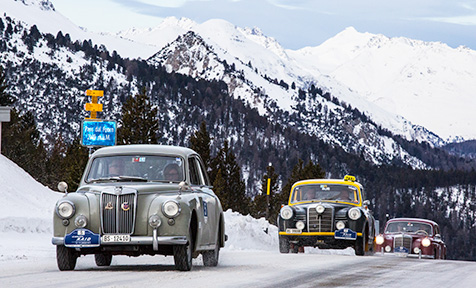 Because one vintage car event just isn’t enough for January: this classic car rally runs from St. Moritz, to the Dolomites and back again over some of the most spectacular mountain roads, passes and valleys on the continent. Whether you’re staying in St Moritz to wave them off and welcome them home, following the tour or behind the wheel yourself, it’s an event worth getting involved with. The winner is crowned the ‘White Star of St Moritz’ and the after party seems to be bigger each year. Usually hosted in January. Photo: Swiss-image & Giorgio Montanaro 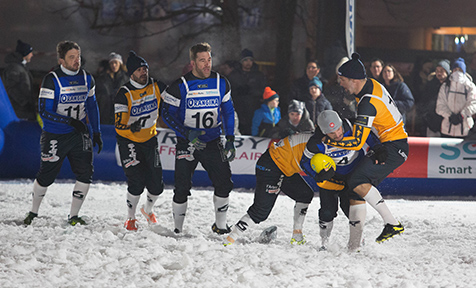 Pigs may well take flight before you bag tickets to a Six Nations final. Luckily, the Six Stations is far more accessible. Find yourself in France come the height of the ski season and you can watch players (stars Mike Tindall and Serge Betsen among them) compete night after night right from the ring-side. Over the course of a week, matches move between the French resorts of Val Thorens, La Clusaz, Les Menuires, Valmorel, Chatel and Megeve, so you can tour some legendary slopes in the afternoons. Assuming of course you pull off the miracle of raising yourself from the bed... According to players, what takes the biggest beating during the tournament are their livers. Usually takes place over February half term. 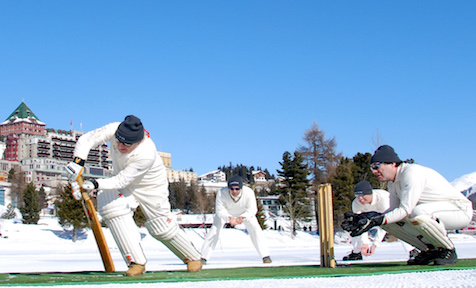 To witness another national sport as you’ve never seen it before, join St. Moritz’s annual Cricket on Ice tournament in Feb and expect excitement. Though the pitch is ice cold (matches are held on frozen lake Moritz), the sportsmanship these days is red hot, with sporting superstars from Pakistan, India, Australia and other great cricketing nations testing their skills in almost Arctic conditions. See if you can spot that the ball actually travels further due to lower air resistance high up… This being St Moritz, expect plenty of bells and whistles off the pitch too… Mislay the winter coat, but do not forget a dinner jacket. Usually happens in February. Photo: ice Swiss-image & Andy Mettler 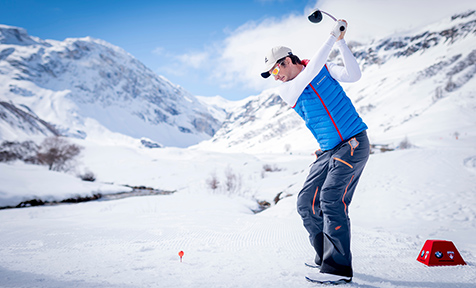 If you’re more about getting in on the action than ogling from the side lines, the BMW Winter Golf Cup offers a new take on an old sport which is open to all (all, at least, with a minimum golfing handicap of 36). First teeing off in Megeve 20 years back, organisers added competitions in Val d’Isere to the bill in 2012 and Crans Montana and Aspen have also recently boarded the golf buggy. Technically, you can just participate at one of the tournaments, but it’s more likely you’ll do all four. Thrills like Street Golf sessions, participating in an official leg of the Ryder Cup and eating your way through the resorts’ best restaurants are experiences you’ll want to have more than once. Usually takes place in February. Photo: Val d’Isere tourism. 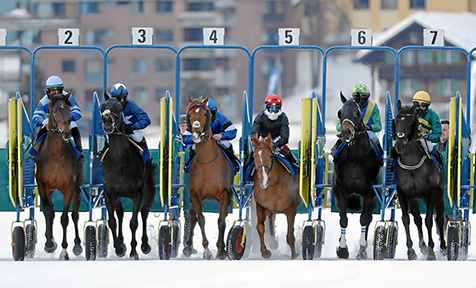 Essentially Alpine Ascot, White Turf’s seen horse racing in snowy St. Moritz since 1907. Fine European thoroughbreds, international jockeys and thirty-thousand spectators gather on the frozen lake over three Sundays every February. No need to dress for the Royal Enclosure – just wrap up warm and slap on your most stylish sunnies to watch, wager and cheer on the trotting, flat and skijöring races. Expect live music, foodie stuff, art shows and designer shopping besides the horsey events (this is St Moritz, after all). Usually a February event. Photo: Swiss-image & Andy Mettler. 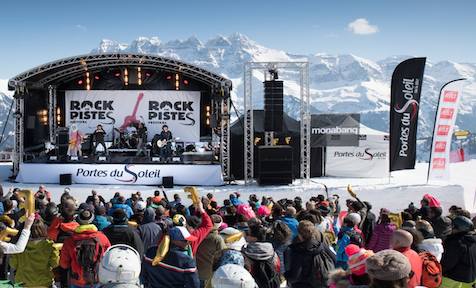 Though comprised of tiny towns of a thousand-odd mountain folk, this glacial Glastonbury somehow draws crowds of over 28,000 to the Portes du Soleil ski area every March, and doesn’t feel apocalyptic. With stages strewn across the slopes, all you need to catch artists like The Klaxons and Babyshambles is a lift pass, a passing ability to ski and a strong overarm throw (shows have previously erupted into friendly mass snowball fights…). Besides exploring the colossal ski area between shows, fun like a mass treasure hunt and in-resort après concerts make for a ski trip (not to mention, festival) like no other. Usually held in March. Can’t make it? Ischgl's Top of the Mountain concert was the very first mountain music fest (opened by Elton John), now takes place three times a season, in November, at Easter AND to bring the season to a close. Meanwhile, rock royals and indie influencers like Kasabian and The Prodigy descend on Mayrhofen in April for its annual Snowbombing festival, described as “Ibiza on snow” (in atmosphere, not so much music taste). 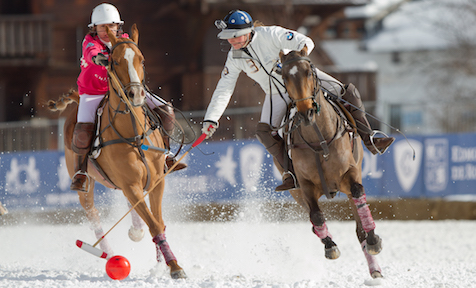 Missed your snowy polo fix in St Moritz or famished for more? Trot over to Megeve for its annual Snow Polo Masters. This French offering to the winter polo scene has been a fixture on the calendar for over two decades now – come here for a long, luxurious weekend of games, parties and ponies (don’t miss the ADORABLE kids display on Shetlands) at the Esplanade du Palais des Sports. Sometimes held in January, other times March. Image: Simon Garnier 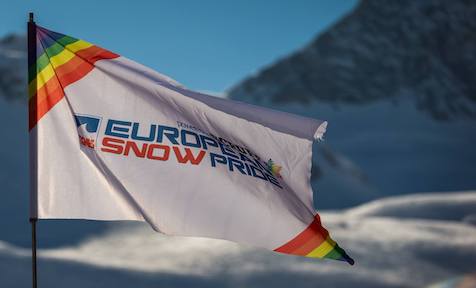 Love is love and if you love skiing too, you’ve come to the right place. Take that undeniable buzz you get whizzing down a mountain, inject the colourful elation of a Pride festival and, hello presto, this is what you get. Come one, come all to European Snow Pride in Tignes, celebrating all things LGBTQ+ and giving you the chance to be yourself, ski your socks off and enjoy a spot of partying too (international DJ’s and artists, pool parties, discos and more). Usually hosted in March. 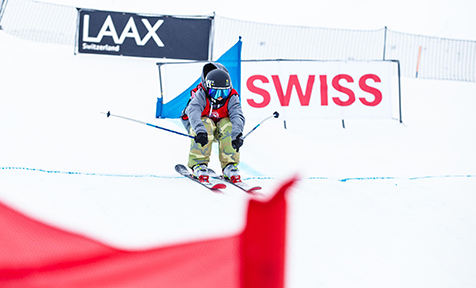 See off the season in (free)style: celebrating snow stars over popstars, this Brits is an action-packed UK freestyle competition in swish Swiss Laax. Every April, the stars of GB’s Olympic freestyle team battle it out with up-and-comers in slopestyle, halfpipe, Cross and Big Air (ski and board) competitions fierce as any on the planet today, pulling off tricks even harder to believe if you see them in person. It helps having the world’s best freestyle park as a venue. After hours, rub shoulders with the stars of the show at costume parties, DJ sets and live acts. Usually happens in April. 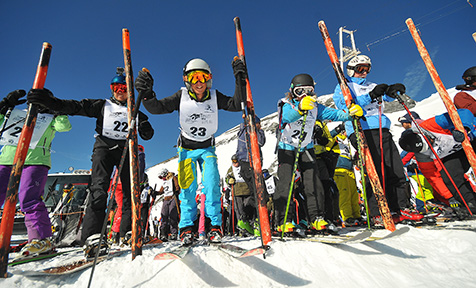 You may associate La Grave (over the hill from Les 2 Alpes) with death-defying expert runs, but it has a fun side too. For all with a few years of skiing under their belts, the Derby is an end to the season of the silliest sort. For over 30 years this has brought skiers from far and wide (these days, around 1000 revellers) to race down the slopes of the Dom de la Lauze on skis, boards, bikes, inflatables (anything you can stop and steer), all this, in costume. Joking aside, there’s a serious sense of achievement on conquering the 9km route, descending a 2km+ vertical, most of it off-piste – just try not to trip on the feather boa… Usually an April event. Photo: B. Boone.