Voted 38th out of 48 reviewed chalets in Alpe d'Huez France

We were there from 4th to 11th March 2018.
Rooms 7 and 8 are tiny with very low beams only suitable for children or singles. The chalet has no soundproofing between rooms, and wooden baths in each room instead of shower cabinets is a triumph of style over practicality. It has no vehicle access - all access is either from a steep pathway (snow covered and icy while we were there) or down the quite steep piste at the back (which was hard work with suitcases, but safer).
No attempt was made to clear access to the chalet, with guests struggling from the path onto the piste and round two walls of the chalet on sloping ice to get in and out. We dug snow and cut steps ourselves to make this safer!. Chalet hosts said they "were not insured and would be liable if anyone fell where they had cleared". Ludicrous.
We had to park in a municipal car park some distance away.
All of the beds were cheap and falling apart (literally) ie. they collapsed when you sat / lay on them. This was a daily topic of conversation, but nothing was done about it. We had 3 light bulbs gone when we arrived - and they had not been fixed when we left. The door handle on our room was broken when we arrived (you could not close the door from the staircase...) and was still broken when we left. The freezer was also broken when we arrived and still broken when we left. The boot room door lock was effectively unusable as the door did not close properly and the hasp hanging half off anyway, so no security.
This is advertised as a ski in /ski out location, but beware; the piste it is on is NOT suitable for beginners. It is quite steep, narrow and twisty, plus a rather vicious, icy tunnel with a bend half way along it! We saw many people out of control in the tunnel with several fallers - and icy concrete is not very forgiving.
The food was uniformly poor. Breakfast was from 8 to 9 o'clock sharp - arrive late and the hosts were gone - and not well cooked (burned bacon, underdone eggs...). Croissants were frozen / part cooked, not fresh. For the evening meal, Great British Bake Off should have taught the Chalet owners that giving young staff a recipe for a Cordon Bleu meal does not make the food edible. The small portions and lack of provision for second helpings would also have been a problem had the food had been better, and were inappropriate for a ski holiday. Similarly the poorly cooked home made cake for the afternoon were ALWAYS burned (we had one that we genuinely thought was chocolate until we cut into it... a set of cupcakes had 13 left untouched... One meal went completely wrong - we didn't eat until 8:45pm and had main course before the soup!. We were also concerned to notice that the ham in the fridge for our breakfast was a week beyond its use by date.
Resort Management were almost invisible and completely useless - saying they are sorry is not the same as doing something about it!
A budget Chalet plus incompetent management does not make for a premium holiday.

We had a good week. The location is good, chalet itself was a bit tired but ok…
I wouldn’t say the food was particularly great. It would have been nicer to have fresh baguettes rather than the frozen part bakes that you can buy in England (we ended up going down and buying some). On a couple of days the cake was burned.
The chalet wasn’t cleaned – we thought the rooms would be checked over every day and they weren’t… And when we arrived there was an ash tray full of cigarettes left on the balcony.

Helpful review?
2
Jutta from Hertfordshire has written 1 review and been voted helpful 3 times

It’s a great chalet. Our two hosts, a couple, were absolutely fantastic, I truly can’t rave about them enough. The location’s brilliant as it really is ski in, ski out if you have the snow. We could ski down and in literally a minute we’d be at the yoghurt pot lift that takes you to the main area.
The only downsides: there are no showers, and proper men in little wooden tubs just doesn’t work! For a group of 16 people, the sitting area (there’s only one) is pretty tight and we couldn’t all sit there together. I don’t know if they could extend it but it would make the chalet a lot better if they did. The dining room however was fine and we could all sit and eat together comfortably.
Other than this, it’s excellent and I would highly recommend it for big groups.

The chalet’s lovely. It was clean and warm and our chalet host was really nice. We had nice food (including a special 4 course meal on New Year’s Eve) and were well looked after throughout the week. It was easy to get to the lifts and we could ski back down to the building.
If I did have to have a negative (and I’d be really scratching for one) it’s that the rooms could have done with soundproofing. The walls were very thin so noise really travels through the rooms. As it happened the other people in the chalet were very nice and the kids were good as gold.
Our room was fine, there’s a boot room downstairs so we didn’t have any trouble with storage. We used the table tennis table down in the basement and the chalet also has a sauna and hot tub, which we didn’t use but some of our group did – they were there if you wanted them and everything worked as it should. Overall a very nice week!

A great resort and an excellent chalet! Our hosts were truly brilliant and the food was great.

If you like the look of a trad’ Scando-chic chalet with all the mod-cons, you won’t find a better base for your holiday in Alpe d’Huez than the beautifully finished La Breche. We just love the outdoor hot tub and free wifi means you can Tweet your pics of relaxing in and drinking bubbles at the end of the day. NB if the hot tub or wifi are essential to your holiday, be sure to ask us to check before you book, because chalet specs and features can sometimes change. 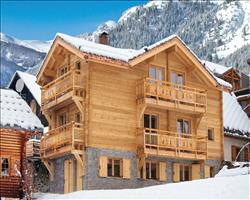