Voted 7th out of 7 reviewed hotels in Banff Canada

Recommended by friends and did not disappoint

Fantastic! Superb! It’s a lovely hotel and a lovely resort. It was recommended to me by friends who stayed there a long time ago. Everything was as we expected. The room was massive, they have so much space over there. Space to breathe! It’s a different way of life. We had a balcony, and the room was clean and tidy. The beds were huge – 12 or 15 foot! Everything is bigger in Canada.
It’s very quiet in the hotel and it’s in a quiet position. There’s a local bus into Banff and to the skiing, but you can walk into Banff town in about 15 minutes along the main road.
I ate out a lot in Banff but the food at the hotel was good. There was a lot of meat which I struggled with a bit; they love it, Bison and deer and elk! The portions are huge.
There is a spa at the hotel, it’s huge and well run. I went to it every evening. There’s a sauna and a Jacuzzi, it’s all free. The hotel itself is very large which can feel a bit impersonal, but it’s very efficiently run.
The Canadian service is another level to Europe. The staff at the hotel were very friendly and knew what they were doing. There were families at the hotel although I’m not sure it’s ideal for people with young children because it isn’t ski in / ski out – it takes between 20 minutes to an hour to get to the skiing depending on which area you go to.

It’s a lovely resort. Everything is in one place so you can easily wander around town. Make sure you have a hat and gloves on though! There are lots and lots and lots of restaurants in Banff - any type you fancy. There are a few Chinese restaurants and lots of American/Canadian style grill places. There are some very nice à la carte restaurants that I tried as well. The gift shops and the ski shops are alright too. There’s some nightlife; some of the young people were going out to nightclubs.
I think it’s a lot calmer in Banff in the winter than in the summer, it gets very busy in the summer but when I went in March it was quiet. It’s very cold in winter, I think that is part of the reason. Make sure you bring plenty of warm clothes with you. I wouldn’t recommend to come here at Christmas time, I think it’s better to come later in the year when it’s warmer like late March/April.
The skiing is set in a National Park and there is lots of wildlife. I saw Cariboo outside my hotel! Also because it’s in a National Park they don’t have restaurants up on the mountain, only one lodge down at the bottom. The lodges were always nice and it worked well with the food. The weirdest thing is that the local people just leave all their stuff lying around in the lodge while they go skiing, all their rucksacks and clothes and even their valuables which I found surprising. It’s mainly Canadians in the resort.
The skiing is completely different to Europe – it’s a different approach. The actual ski areas are all quite far away from town. There are 3 main ski areas you can go to from Banff by bus and it takes between 20mintes to around an hour to get to them. It’s more laid back in that respect. It’s a huge area and there are lots of mountains. The buses out only run between about 7am to 11am, so you need to be organised and get up in the morning. You can’t really just ski in the afternoon, it’s quite confined in that way. It’s not great having to get up and going if you are hungover or you have young children!
Mt. Norquay is probably the best area for beginners and it’s close to the town. While I was in Banff I hired a guide through Nonstop, that was very good. They also have free local guiding, I think there was information on this through my tour operator. They drive you out and take you off-piste for free! It runs once in the morning and once in the afternoon at Lake Louise, and once in the afternoon at Sunshine Village.
The skiing itself can be extreme. They only have one gondola and the rest are chairlifts. No drag lifts. The chairlifts don’t have covers so it can get cold on them….it was -17 while I was there. The lift system is a bit antiquated (they admit it themselves), the lifts look like something out of the 80s! They still use lift passes with barcodes that need scanning. The pistes were really empty, there were hardly any people there. They don’t piste all the routes, even some of the blues, so you can be skiing along thinking ‘this is quite mogul-ly’ and then suddenly you’re in powder! The snow conditions were excellent, loads of powder. Everything’s in a big bowl so it’s good for off-piste.
It’s worth going on the sight-seeing gondola ride while you’re in Banff, it makes a nice break from skiing. I didn’t do much else than ski while I was there but there are other things to do and in the summer you can go rock climbing. 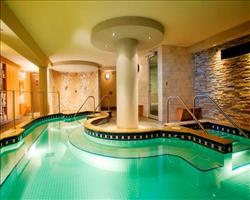