Voted 65th out of 72 reviewed apartments in La Plagne France

We were a bit disappointed when we first saw the apartment but the rep was very helpful and offered to move us. My husband was skiing but I was mainly housekeeping, and she did see my point that I was going to spend most of my time in the apartment. The tiny little balcony we had just looked out onto shovelled snow.
It was supposed to be an apartment for five but we filled it comfortably with two of us. The bedrooms were small, we used one little bedroom and kept our clothes in an even smaller bedroom. The fifth bed was in the living room. It would have been terribly cramped with five people, unless they just wanted to ski and party with somewhere to sleep in overnight.
The lighting wasn’t particularly good in the bathroom, and just needed a brighter bulb.
Otherwise the apartment was very well equipped; the beds were comfortable and everything we needed to cook with was there.
Perhaps it’s typical of a French apartment, but it’s worth knowing that you have to supply absolutely everything. The apartments don’t have any dishwasher powder, toilet paper or any of the basic domestic bits and pieces. Fortunately, the shops were close by! We had to remove it all when we left, we couldn’t leave anything behind for future guests. Towels, sheets and pillowcases are hired from Reception on arrival.
Ski in ski out was good but the ski room floor was usually wet. Most people carried their ski boots back to their rooms to ensure that they were warm and dry for the morning.
Something else to mention was that when we booked there was a misunderstanding regarding upgrading the apartment. We were told we could have an upgrade to a larger five bed apartment for something like £10-15 each. However, that turned out to be the basic cost, we then had to pay under occupancy charges which brought the price up.
The transfers were long but OK. Geneva airport on a Saturday in the season is very busy, we were queuing for hours! Apart from that we had a great holiday, my husband enjoyed the skiing and I found the local shops very convenient. The weather was good and we did some nice walks. Everyone we came into contact with was helpful. 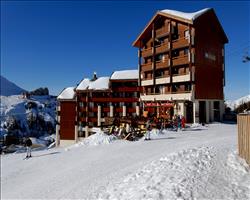