Voted 6th out of 6 reviewed hotels in Levi Finland / Lapland

It was good, we had an upgraded room which was nice. Generally we all thought it was a nice hotel. It definitely has a great location, you just walked round the back and up to the bottom slope. The pools were nice as well as the hot and cold spas, and the whole place was clean. The food was excellent, there wasn’t a huge choice with the buffet but it was good, and we liked the breakfasts too. I don’t think we had any issues.
The only thing was that our room had a bedroom and a lounge, which had a pull out sofa. I was sleeping on the sofa and it was really uncomfortable, you could feel the bars through the mattress. I asked for a mattress topper which they did bring, but for what we paid I would have preferred to have a proper bed.

Helpful review?
3
ANON from Warwickshire has written 2 reviews and been voted helpful 4 times

When you walk into the main hotel, you get a real cosy feel and it all looks nice and clean. There’s a nice little cosy bar area where you could sit, have a drink and play cards. The hotel only has 2 floors but there isn’t a lift, so if you can’t/don’t want to carry suitcases up the stairs it might be good to request the ground floor.
The place itself is like a continental hotel with buildings outside that aren’t a part of the main hotel. They drop you off with very vague information on the block you’re in, then leave you trundling along a car park with your suitcase rather than leading you to the block. Once you work it out though, it’s not too bad.
Some other guests had an underground tunnel that led to the sports facilities, but we didn’t. With everyone walking around dressed up in full whack as it was so cold, you couldn’t just get up and go if you wanted to use the pool, you’d have to layer up first. I’m sure loads of people staying there used the pool and bowling etc – especially those with children to entertain - but we didn’t bother.
Having skied in Austria before, we packed smarter clothes to wear for the evening meals – however you don’t need to! Here it’s more like a massive canteen – quite cosy and nice but not at all formal. Everyone was just wearing their salopettes and thermals having just come in from activities and excursions, and kids were running around. There are so many people you have complete anonymity and it doesn’t matter what you looked like. So it didn’t really have a restaurant-y feel but rather a very casual vibe. In some ways when you’re tired it works well. The buffet itself was edible but very basic – we took it for what it was.
They didn’t do a bad job with the Christmas meal – we were told we were upstairs at the very back, so expected there to be hardly any food left when it came to our turn! But actually they’d put the younger kids down on the ground floor as Santa goes on stage. We were sat at a long table and hit it off with the people next to us, and the ones upstairs were called first for the dinner. The meal wasn’t fine dining – but there was masses of food to go around.
In terms of location, it’s super close (about 5 minutes) to Zero Point, where you go and get your skis and equipment from.
We thought there would be signs up indicating when was best to see the northern lights, but there was nothing! Luckily my daughter found an App that told you when there was a good chance of spotting them, so we managed to dash out to the frozen lake and see them on the last night.

Wish we could book again!

The hotel ticked all the boxes for our family. It was a first ski holiday for the kids, so it was good to have a hotel with lots of things to do in case they didn’t like the skiing (though instructors were great and they did!). The pools were great, we used them for about 2 hours every day. The rooms worked fine, we didn’t use the little kitchen in the corner much apart from making sandwiches. Would we have liked more space? It would have been nice if the kids didn’t have to walk through our room to go to the toilet early in the mornings! Getting around was a doddle, 5 minutes to the town and 10 minutes to the slopes. 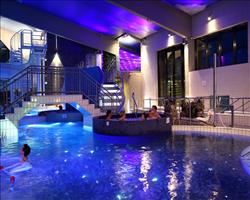