Voted 58th out of 72 reviewed hotels in La Plagne France

OK, room too hot and basic

The Vancouver was OK, not brilliant but alright. The food and restaurant were quite nice but for the money we had paid the room was fairly basic. The heating and temperature were no good, being stuck on all the time made the room like a sauna… It was -10 to -20 degrees outside and we had the door open. We did raise it early on and they said they’d look into it, but they didn’t. The location was fine for Plagne Soleil but overall for the money we paid we were a little let down.

Hotel Vancouver - ok but nothing special

We stayed in Hotel Vancouver on half-board basis. Is located in a quiet location in Plagne Soleil. The food was ok, good variety throughout the week for dinner, however breakfast is limited and not restocked very frequently. Our room was way too hot, uncomfortable, think sauna, as heater was stuck on. We had to leave balcony door open at night. Despite asking hotel mgt to fix it, nothing was done. Apparently central boiler downstairs was on a fixed temperature as well. Boot room downstairs is not heated and boots remain cold/wet overnight. Despite Sat TV advertised, only one English channel, a news channel predominantly focussed on Asia. At least the wifi worked. Overall, its an ok hotel but we won't be going back there.

Helpful review?
0
G.W. from Colchester has written 1 review and been voted helpful 1 time

The food was excellent, first class. It was quite limited but it was all very well done and I’m sure that if you wanted something different, they’d have made it. They also did a 5-6 course dinner to celebrate New Year’s Eve.
We had to keep asking them to light the fire – we Brits like a nice fireplace – but they only ended up doing it every other night. There was a nice spa; the only gripe was that they did allow kids which I suppose is to be expected, maybe they could limit the time?
The positioning was really good. Provided the conditions were right there was doorstep skiing, and we were fortunate to have good conditions! If you weren’t skiing out, it was only a short walk across the road.

Helpful review?
1
Nick Crook from Monmouthshire in Wales has written 2 reviews and been voted helpful 4 times

One of the best hotels we’ve stayed in

The hotel was very good. There was only one slight problem when we arrived (I can’t remember exactly, I think the shower wasn’t quite in position or something similar), anyway it was fixed the next day so I was happy with how quickly they dealt with it. It was all very good, the service and the food. Overall it was one of the best hotels we’ve stayed in. We were very pleased with it.
There is a pool – it’s ok for a hotel pool, we went in it once. My wife is a serious swimmer so it wasn’t really what she’s used to.
The position of the hotel is very good, you can go straight out onto the slopes. Lots of the blues in that area have red sections, and the piste outside the hotel is a blue but it does have a tricky section immediately after you get onto it. It drops straight off, we saw some total beginners were stuck there on the first day. It’s a long way poling to get back to as well, but you can ski into the village instead and then walk over the road and you’re at the hotel. If it wasn’t for the difficulty of that first section of piste outside of the hotel then I would give the hotel a 5/5.
I would recommend the hotel for anyone, it’s general purpose and not particularly family orientated or especially suited to a particular kind of person. It’s in a quiet location in Plagne Soleil, more on the piste than in the town, so the position isn’t so great for party animals. We come to ski though so it was fine for us.

I thought the hotel was really good for what we paid. It was let down a bit by the restaurant... the food was good in the evenings, they prepared quite a reasonable choice of good quality dishes and if you didn’t like something, they’d happily knock you something up like a burger or even a steak. The main problem was the breakfasts which were appalling, you go in and they say you’ve got hot options like scrambled eggs but it turns out the scrambled eggs have been sitting there for 3 hours which wasn’t very pleasant.
I don’t think the boot room was particularly heated but it was OK. The hotel is “ski out” but it’s quite difficult to get out – you had quite a walk through an underground car park to get to the actual “ski out” part... having to go out the hotel, down to and across the underground car park in ski boots and up and out a door and through the exit onto the piste. From the skiing out perspective, I wouldn’t recommend the hotel to beginners. You wouldn’t be able to do it if you were a complete beginner as it’s a fairly steep slope down the hill to the ski lifts. My wife struggled a bit and she can cope with most blue runs, if you were a competent red run skier you’d be fine. 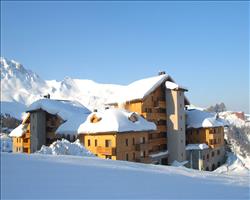