Voted 6th out of 20 reviewed hotels in Sauze d'Oulx Italy

La Torre is a decent hotel and we had a really good week!
I’d read mixed reviews online but I think they were a bit unfair – a few said the food was weird but if you ordered weird food from the menu, weird food turned up. One thing that was a bit strange was that depending which waiter you had, they sometimes tried to charge you for water… other than this meals were nice, there was a big selection with an a la carte menu and also a buffet. The buffet was perfectly sufficient for dinner. Quite a lot of the dishes on the a la carte menu had been translated quite badly, there was a running joke that you didn’t know whether what you ordered would be soup or not, but at the end of the day you’re in a foreign country and I really enjoyed the whole experience.
Our bedrooms were completely fine; it’s worth knowing that the whole hotel has single beds, there aren’t any doubles. The rooms did have weird plugs, not the standard European ones, which a few of our party had taken – not sure if this was just the hotel or Italy as a whole. It was a bit steep to use the spa facilities (about 25-30 euros for the sauna) so we didn’t bother with those.
In terms of the location, it was only a little walk to the main lift and they also had a bus to take you to the other lift. The hotel is also right next to where you get dropped off on the transfer - it’s literally adjacent to the tourist centre (quite a lot of people staying elsewhere had to follow a tractor to get to their accommodation as the roads were too narrow).
We managed to get 25% off our ski hire because the shop we used was linked with the hotel. They also gave you insurance against breakage/loss for 10 euros extra which was definitely worth it.

I would definitely recommend this hotel.
The food was so good here we didn’t need to eat anywhere else for the week.
Bedrooms were lovely – bigger and better than other places I’ve stayed in Sauze d’Oulx and there are minibuses to take you to the slopes. 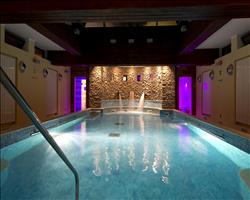