A good hotel, nice and clean with pleasant staff. The food was lovely, though it got a little repetitive towards the end of the week… I know it’s buffet style, but the special hot option each day was raclette on four of the days, then burgers with raclette cheese on the other day. We had pea soup 3 times, a really nice soup but again just repetitive. Breakfasts were good, with a good selection of food.
The pool was good, a little chilly but I guess you’re in the Alps. The hot tub was nice too. We didn’t use the sun deck or the gym, but the gym looked fairly well equipped. There’s also a games room which was always occupied by the children so that was obviously good too.
It’s located a little out of town, but we weren’t bothered by walking, especially as we’re boarders so it wasn’t a killer to walk. Our rep didn’t tell us that there was a hotel shuttle service which would have been useful to know – we found out on the fourth day when the bus driver recognised us from the hotel and offered a lift! 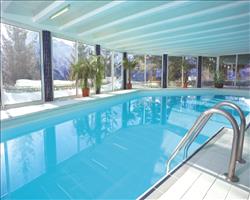