Voted 2nd out of 2 reviewed hotels in Valmorel France

Show me Sort 4 reviews by Date Rating
S. I. has written 2 reviews and been voted helpful 3 times

We had a good week here. It’s worth emphasizing that the hotel is aimed more towards families with young children and it would be absolutely wonderful for that specific market. It’s exactly the type of holiday I would have looked for when my children were younger – it would have been perfect as it definitely caters to those age groups. This is mainly with regard to how they market and run the ski lessons etc., they don’t cater for older children who don’t need lessons which is frustrating when you’ve already paid for them in the overall holiday cost. Also the noise levels might put off older children.
The people were really friendly and the service and standards were good. The location is excellent and the services to and from the place were excellent. You can ski in/out from the front which isn’t so good for beginners. That might put some people off, however I didn’t see a problem as you can just get the bus. Another thing to note is that it takes about half an hour to get over to where the lessons are, so if you have a 2 hour lesson, you spend half of that travelling which an adult learner might find annoying. There are things laid on for non-skiers like walking and the hotel has facilities like a sauna and a pool.

Venturing to Valmorel: A soft ski shuffle as Club Med slips into a calm corner of the Alps

"...The new Club Med hotel attempts to straddle two realms, pitching itself largely at the family market, but also proffering a five-star 'luxury space' (called 'Le Lodge') that attempts to cater for a clientele with more expensive tastes. Here, 25 upper-floor suites stare across at the distinctive summit of Mont Blanc, and share their own exclusive lounge (which also enjoys a view onto Western Europe's tallest mountain).
Most of the accommodation, however, slots into the four-star bracket – a mixture of en-suite Club rooms and slightly larger Deluxe rooms. Each delivers a comfortable, modern environment (with giant flat-screen TVs), but stops short of dramatic boutique flourishes – as you might expect of a hotel that expects its paying guests to turn up with kids in tow.
Such is the Club Med ethos – swish family escapes, with everything included.
This plays out most obviously in Le Celeste and Les Cerfs, the two main restaurants, where a vast feast is laid out three times each day – a grand array of roast meats, salads, pasta dishes, cheeses and deserts arranged in help-yourself fashion.
And here, of course, is the main draw-back of an all-inclusive holiday – the reliance on the same source of food for every meal across an entire week. But there seems to be enough variety in these two options to stave off culinary boredom – and for those who feel the need for a change of scenery, La Laiterie, a gourmet eatery, proffers a la carte dining (by reservation) on the second floor.
There are other nice touches that are designed to fill the time between skiing and eating: a series of children's club rooms that run the full range from ages 4 to 17 (the oldest group neatly skewered by a den that looks like a night-club, complete with DJ decks as well as the inevitable video consoles); a spa that, at first glance, looks a trifle under-sized, but comes with 12 'cabins' for apres-ski massages; an outdoor ice-rink that, with its unusual synthetic surface, is theoretically usable all year round; the ski room, where the numbers on the lockers correspond to the rooms, and answer to the same key that opens your door.
However, it is the ski room's proximity to the pistes – its entrance swings directly onto the last curve of the main run home, making for ski-in-ski-out ease-of-access – that is the hotel's key selling point...."

From, ‘Venturing to Valmorel: A soft ski shuffle as Club Med slips into a calm corner of the Alps’, Daily Mail Travel, 08/03/12 by Chris Leadbeater.

Helpful review?
1
Sarah Nicholson from The Daily Telegraph has written 1 review and been voted helpful 1 time

Club Med Valmorel is described as the company's "flagship upscale snow resort" and can accommodate 1000 guests in 446 suites that sit under the same roof as the three restaurants and four dining rooms, the many lounges and bars, day spa, ski-hire complex, children's areas and library so visitors need venture outside only to hit the slopes.
The mountain retreat is unique because it's the first of the group's European resorts to offer a full collection of children's clubs catering to every age from babies to teenagers, and it features 4-trident rooms and 5-trident suites in the same spot as a handful of luxury chalets.
Club Med uses the trident system to class comfort levels, with the 5-trident suites designed for families and set on an exclusive floor the same standard as the accommodation in a 5-star hotel.
I stayed in a deluxe room with a balcony, a sitting area with lounge, a built-in desk, lots of deep drawers to store my bulky ski gear, a walk-in robe with safe, free wi-fi and in-house movies, and an innovative walk-through bathroom all decorated with the wood and stone that defines the style of the region.
And my room had that view, the dramatic vista that revealed itself with the sunrise on my first memorable morning in the French Alps.

Helpful review?
1
Richard from London has written 3 reviews and been voted helpful 6 times

Everything taken care of beautifully

From the relaxed and efficient check-in through to boot/ski fitting and our first gentle slide down the cruisey blue piste which runs right down the full length of the hotel and on into the village, everything about our trip to Valmorel was slick and aggro-free.
I wasn't sure an all inclusive Club Med style of ski holiday would be my bag, but I'm glad I listened to Alison as Sno who had tested out the one in Val d'Isere the year before and explained the vibe perfectly - it was a really great place to stay.
The location down the side of the piste makes the whole place ski in / ski out and means its also easy to pop back for a drink or snack whenever you fancy a break from the skiing.
There were lots of couples and friends staying but I think this place really comes into its own for families, with their own private nursery slope with magic carpet ski travelator which lets the children learn without feeling nervous... and free childcare/ski school, plus lift pass and drinks etc included mean you can pay once for your family ski holiday and then know everything else is sorted (except rental, if you don't have your own skis/boots).
The skiing in Valmorel seemed to be maybe 80% blues and the rest red (I spotted only 2 black runs in the whole place but could have missed some). Being slopeside is great for mum and dad who know the pain of carrying kids skis around for them. I've seen no better place to take a family to learn to ski - if you want your kids to love skiing/snowboarding, this is the place to choose.
The food selection is simply vast. The options are diverse and the quality of a very high standard. The self-serve approach means you're never left complaining about portion sizes after a big day on the slopes. We all put weight on despite exercising vigorously. The free bar is a little dangerous, but after all, you are on holiday! Unlike usual "inclusive" holidays, the free bar isn't stocked with the usual fare of cheap "stubbies" and awful wine - its stocked with all the sorts of premium drinks that you'd choose for yourself in a good bar.
The entertainment was an unexpected surprise and I didn't expect to be up "throwing shapes" but perhaps that's a side effect of the free bar. The trapeze act (yes, right there in the bar) was a bit random but superb - you don't get that with the mass market likes of Crystal Ski!
I thought the headline price seemed a bit above the average hotel or catered chalet holiday, but when you deduct a couple of hundred for the lift pass (included in this holiday when we went) and another few for the whole week of ski school / childcare (also included when we visited) and then add free meals and drinks (what do you normally spend snacking&drinking during a week in a ski resort?!) then this is actually a VERY cheap ski holiday. Especially when you factor in the high level of quality control that's not evident in normal "all inclusive" ski packages. Apart from skis/boots, you don't have to spend a single euro all week.
Couples will like the boutique feel of the rooms, groups will love the ease of catering/meeting up/varied entertainment, single skiers will love the convivial atmosphere, and families will love the convenience/clockwork organisation/fully inclusive food and drink and included ski school/childcare plus slopeside location. 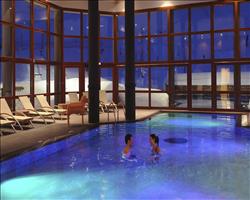