Voted 1st out of 56 reviewed hotels in Les Arcs France

The best thing about this Club Med hotel is the guy that runs it, Jean Pierre. He made the whole experience and I hope they keep him! He was like energy on legs and was everywhere, all the time, dressed up in some different outfit – at the bar at 2am and 4am, there when you were having breakfast, sitting on top of a bubble gun when you came in at 11... The staff had a different theme every day, they’d be dressed up in Alice in Wonderland costumes one day and something else the next. The staff’s energy was tremendous and they always said hello to you. It was really impressive and made you want to be in the staff, they seemed to have more fun than anyone else! It’s not a posh hotel, but they counter balance it with this astonishing amount of effort. The whole thing was an experience overload - it’s like hi-de-hi gone bonkers.
The bedrooms were fine and the rest of the hotel was slightly on the tired side, but we knew that before we went. There were rumours that it was being knocked down/upgraded this summer… My daughter’s feedback is that they need more lifts.
The cleaning staff were really good, folding everything up beautifully (probably Jean Pierre's influence!).
The food is probably everyone’s idea of happy heaven, but for me it was a bit too much. They serve up everything all in one go, things like foie gras, beef wellington, smoked salmon, roast lamb…. For afternoon tea you could have anything and everything. I think it was a bit over the top and there was too much waste, people can’t resist trying everything and then you end up leaving things. If they scaled back and served 3 or 4 options rather than 23 it would have been better.
Location-wise, 2000 has nothing to do, but you have no reason to go out when you’re staying at Club Med. The ski in and ski out is definitely not for beginners, but you can do it by walking around if you don’t want to ski.
My girls went out on the lessons with the ski instructors and were reluctant at first but ended up enjoying it.
Overall I would definitely recommend it to people who want all inclusive. 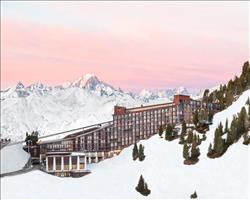