Voted 13th out of 62 reviewed chalets in Tignes France

The chalet worked really well and is in a good location. You can pretty much ski in and ski out which is perfect – 2 minutes from the slopes, from the ski hire, from the shops, from the pubs…
We chose a specific room that cost very slightly more because it had a balcony and Jacuzzi bath. There was a shared balcony which was fine but we didn’t have the Jacuzzi bath which was disappointing when we’d paid extra.
The chalet hosts were great!
Meals were good, we had a bit of variety including some traditional dishes so it was a nice balance. It wasn’t stodgy and came with nice salads etc.

The chalet itself was lovely, it’s obviously new and was spacious and comfortable.

I really can’t fault the accommodation, the only issue was more to do with the chalet hosts. If you asked for something (e.g. we asked for pillowcases as some pillows didn’t have them) it didn’t necessarily happen. Someone had obviously cut their hand when they were setting the chalet up, so there was blood on the bedding – we told them about it and they were naturally embarrassed, but it was quite evident and I don’t know how they missed it when preparing the room. Things like emptied beer bottles were just moved around rather than being put away (by the end of the week the balcony looked like we’d had a big party as there were so many bottles from the week). In chalets I’ve stayed in previously, they’ve come in every morning and cleared up.

Our host was a lovely girl, she just seemed to find everything hard work and never seemed very happy with her job when we spoke to her, maybe because she’d done a few seasons before she’d just become a bit comfortable.

She was a good cook and the food was good, which goes to show she had chalet experience (other people who had newbie hosts were saying their food was burned or undercooked, but ours was good). All of it was very rich, with every meal being a full on five courses of canapés etc., churned out one course after another. It might be a good idea not to have so much rich food every night, we were craving a pizza at one point!

In terms of the location, it would have been good for someone to show us how we could ski out as it wasn’t until we were on the coach home that we found out we could have skied to a slope from the door. We were quite happy doing the trek in the week, but skiing would have been even better – maybe if the chalet host walked us there and pointed out the route it would have been better. It would have also helped if they maybe walked us into town the quickest route. 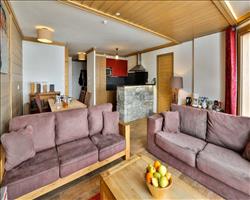