Voted 13th out of 62 reviewed hotels in Tignes France

Show me Sort 8 reviews by Date Rating
Fiona B. from London has written 1 review and been voted helpful 2 times

Really, really good! The food was excellent; we had half board with breakfast, afternoon tea and a 3 course dinner. The location is perfect, it took us a five minute walk to get to the lifts and the town as well. Facilities were really good. I would definitely recommend staying here!

There wasn’t anything to fault

We had a great time, this is a really good chalet and I don’t really have any downsides. The rooms were a good standard and good quality – we had an adjoining double for us and our kids and it was fantastic, with a nice balcony. The bedrooms and bathrooms were kept nice and clean and the housekeeping was very attentive. Food was second to none, couldn’t fault it! The choices of meals were great, there wasn’t a meal we didn’t like the sound of. The younger kid’s meals looked nice too. The staff were very helpful and knowledgeable. The position of the chalet hotel is good as we could come out of the boot room straight onto the access road that brings you to the slopes. Directly opposite, 40 metres away, is where the shuttle bus pick up point is, and the drop off point was opposite that. You’re on the slopes within 5 minutes. All in all, a great week!

Excellent for our family

Excellent! I don’t think there’s anything I could fault, it met all of our expectations. The kids were looked after well, the staff were good and the food was great. Bedrooms are a little small but that didn’t bother us. We used the pool all the time. Location was a bit of a bind at first when it came to reaching the slopes, but we soon found our way around – the walk takes about ten minutes.

5 star! It’s brilliant and I like everything about it, I stayed here last year through SNO as well, and recommend this place all the time. For anyone who skis it’s the place to go. You couldn’t knock the staff one little bit, especially the manager and catering manager. Everything is very clean – some people say it’s getting a bit worn but it’s fine. The food they serve is really good, not stingy at all, and if you want anything in particular they just deal with it to accommodate you.
When we first stayed here we were warned about it being away from the lift. However there’s a brilliant tow across the car park which makes it virtually ski in, ski out.

A wonderful chalet in a great location in Tignes

I visited the chalet hotel in Dec and had a great time. The pool facilities were especially great with a large heated pool, water fountains and hot tubs! The food was really great and we always had a choice (including wines). The staff were also excellent and always did their best to help (my friend was gluten free and forgot to let them know before hand, but they put together last minute special meals for her for all 3 courses!). The location is also great, very close to the slopes. The feel of the chalet hotel was very homely. Would certainly go back.

The chalet hotel is really nice. I hadn’t done the sort of holiday before where everything’s so sociable – they sat you in different places for dinner each evening to mix people up and get everyone talking. Actually quite a few people mentioned that it was so noisy in the dining hall that it got to the point where you could barely hear what anyone was saying… The food was really good with a decent amount of choice – by dessert I was always full! I thought the afternoon tea was really good, we had cakes, biscuits, salmon on crackers, sandwiches... There was probably too much of it as it didn’t all get eaten most days, which isn’t a complaint as such, but it would have been a shame if it was going to waste.
On the night out, the hotel booked us into a restaurant somewhere quite high up in the town. It ended up snowing so what we did instead was book into a restaurant connected to the chalet hotel (possibly called Chalet Bouvier?) where some of the other guests were eating. The chef had previously worked in a Michelin starred restaurant and the food was amazing. It was also the easiest restaurant to get to by far, so I’m glad we ate here instead and would recommend that others do too!
Our twin room was a good size, no problems with it at all. I liked having a gym and a pool – there were a few issues with the Jacuzzi not working which my dad was disappointed about but I prefer the sauna anyway!
The location is probably the best you can get without being able to ski to the door and the local buses were really regular.

Helpful review?
2
Anon from Bristol has written 1 review and been voted helpful 1 time

My room was lovely, with the beds made every day. The spa and pool were very nice and the staff were friendly. In terms of the location, I didn’t find it a problem having to walk / get the bus to the slopes.
I’d give it a 4 or 5 out of 5 if I hadn’t lost the last 2 days out there to food poisoning.

We had a fantastic week and very much enjoyed our stay in Chalet hotel L'Ecrin. All the staff were very friendly and seemed happy. There was a good mix of people staying there, from older couples to families with kids and young people who have the bar etc – everyone seemed to be having a good time. My room was perfect and the food was great, with nice variety (it was a little bit of a mix, some French things and a little bit of British). There was always more than enough and they’d bring you more from the kitchen if you asked for it. 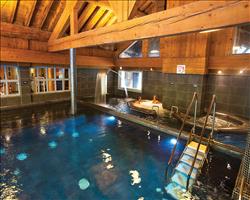