Irish Pubs are known for throwing the best parties in the mountains, but St Patrick’s Day sees the merriment seriously step up a notch…

If you’re on the slopes but your heart’s in Eire, don your finest green and head to one of the best Irish Bars in the Alps – these taverns have plenty of the craic this St Paddy’s day. 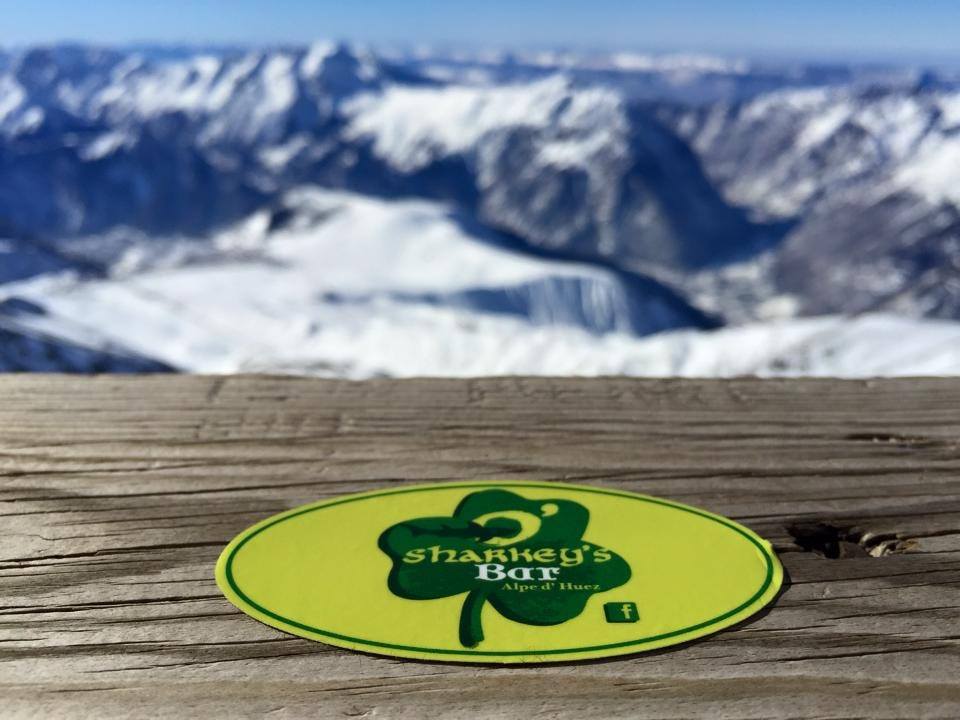 © O’Sharkeys – now that’s what we call a view

With Guinness and Kilkenny on tap, live music and a whopping great capacity of over 300 – St Patricks Day is always a wonderfully wild one at legendary O’Sharkeys. They fly over an Irish band each year for the big week – for 2017, Limerick legend John Frawley’s in town. 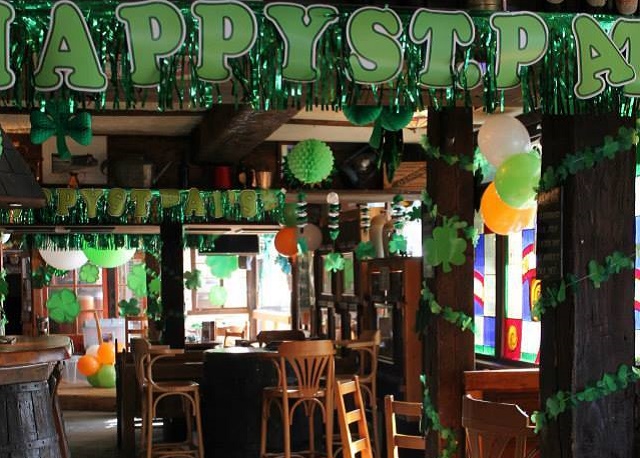 Any pub that has its own microbrewery becomes an instant favourite in our books, and Karine and co. at Le Pub Irlandais lay claim to the only craft beer in Les Gets. Home brews include Wheat, IPA, Dark Ale, Lager, Porter and Real Ale to wash down a plate of their hearty pub grub. We love the tables made of repurposed beer barrels– and the live music on Mondays and Thursdays. Head here on St Pat’s for copious beer and Irish cheer, on top of presents and giveaways. 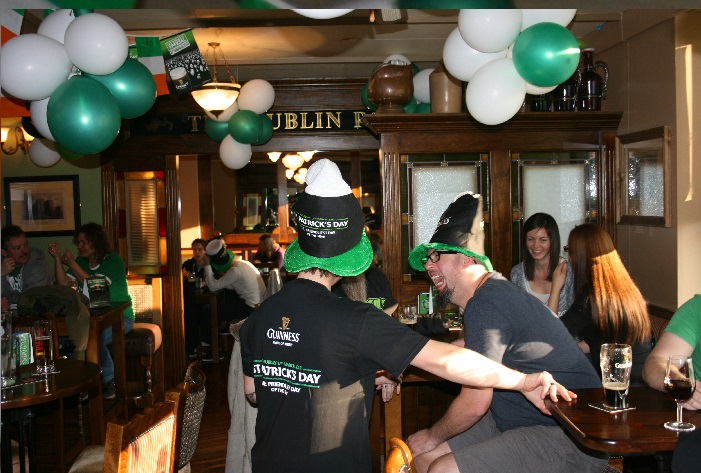 © The 3 Tells – clearly big fans of our #SNOJoke’s

Named after three swashbuckling figures of Swiss legend who revolted against their Austrian overlords, the 3 Tells serve some of the cheapest booze in the Canton. If you can’t make it for the live music on St Pat’s – there’s always its famed 2-for-1 fish n’ chips Tuesdays, and a daily Happy hour with 2-for-1 house beer and wine, which will slice an already reasonable bill in half. 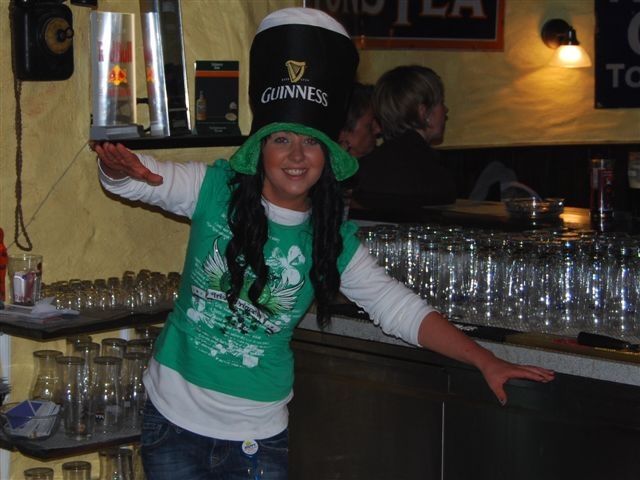 Ray starts the St Pat’s party early at O’ Malleys –where Happy hour becomes a very happy 3 hours in the afternoons, making this one of the liveliest spots in Niederau. A bash out on the sun terrace, followed by live music inside keeps guests here well into the evening on St Patrick’s Day – sipping reduced Guinness and Guinness cocktails – before delivering them to the subterranean Cave Bar a floor down. 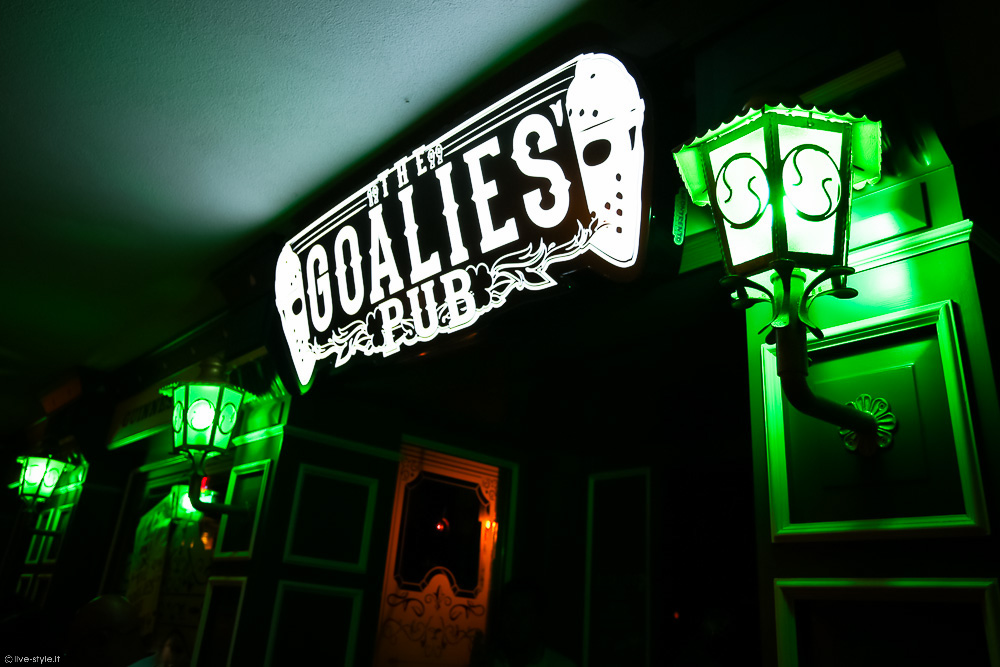 © The Goalies – this pub’s a keeper

Though the father and sons who own the The Goalies are all former ice-hockey net minders, with their laidback barroom, they shoot and they score. This is Irish pubbery at its most traditional, and you won’t find the thumping tunes of DJ Ötzi while you’re draining draught beers (Guinness with shamrocks etched in the head, Heineken, Goalies’Beer, Golden Fire, Murphy’s Irish Red and Weissbier) or sipping some of the best cocktails in town. The soundtrack here’s exclusive rock, blues, country and Irish from the 50’s on. That’s not to say the do’s are any less roaring – on Paddy’s day, Irish music plays from 9:00 am to 2:00 am, the bar’s decked in green, all the lights are green, even the BEER is green. 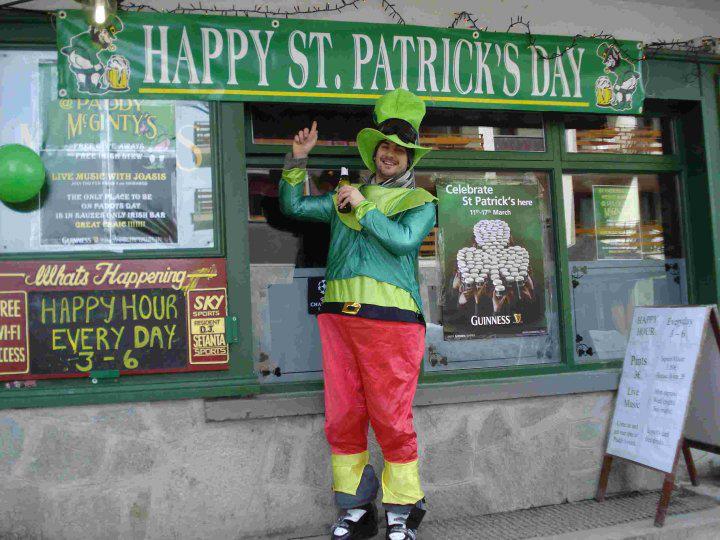 A good bar is like an Irish clover, hard to find but lucky to have – there was never a truer word spoken about Paddy McGinty’s, which we’re gutted to say closed its doors in December. Those who wandered in looking for a traditional Irish experience mightn’t have known how lucky they’d struck it at Paddy McG’s which opened in ’97 – the interior was constructed in Ireland and shipped to Italy and more parties, drinks deals, live bands and themed events have happened here than you can shake a pint at. So, a toast to absent friends, and big thanks to Karen for her hard work through the years – check out the Miravallino Bar she now runs over the road, which is putting on a big Paddy’s party to continue the McGinty’s legacy. 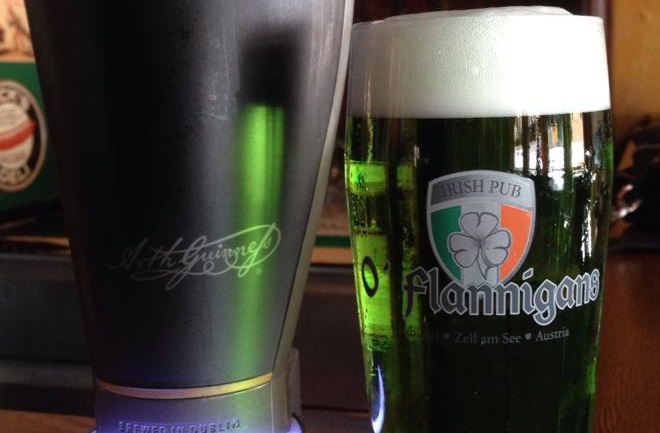 © O’Flannigans – it’s not easy being green

If the thought of missing the match while you’re on holiday leaves you grumpier than a leprechaun without a pot of gold… Never fear. You have more than a sporting chance of catching the game in O’Flannigans, where 5 HD TVs screen rugby, football, tennis, cricket and any sport the remote can churn up. These guys are all about entertainment – with a 3 piece Irish band, bassist-singer team and solo artist among their recurring live acts. Two will be performing on Paddy’s day, when beer also turns green, and the pool table offers the most fun you’ll have out of your ski suit. 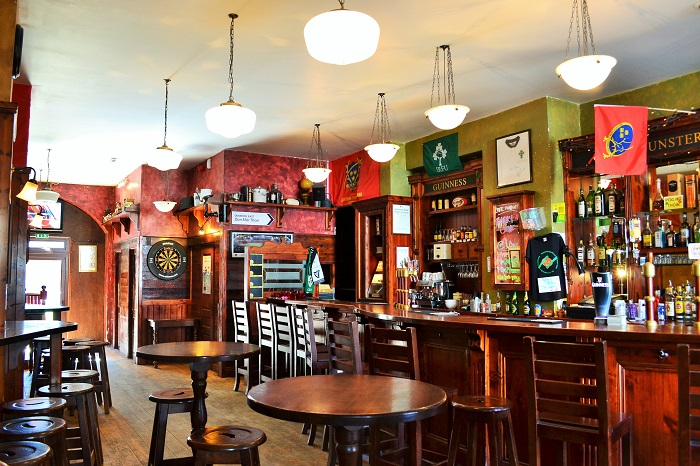 No longer’s the gat sweet to drink but bitter to pay for – the bill in the Munster Bar has no bite with happy hour stretching from 4 to 7, giving you double the house wine or beer for your buck. David’s been running the pub for 4 years and most of the staff are native Dubliners; they know how to do Paddy’s right, with several bands keeping the atmosphere buzzing till 4am. 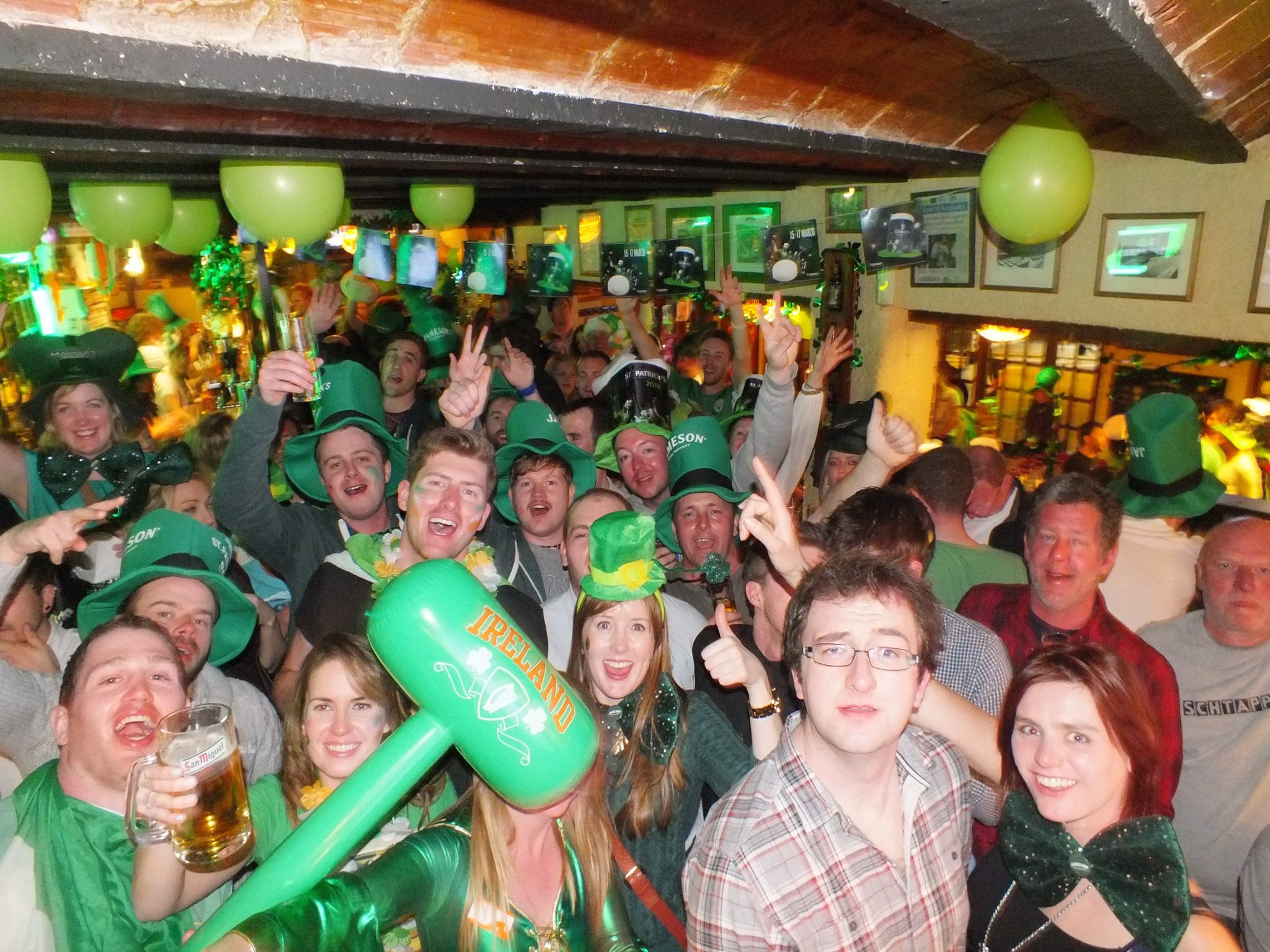 You’re doing much more than stopping for a pint whenever you step into the Derby – you’re joining a team, signing yourself up for some of the mightiest craic in Arinsal. Owners (and twins) Dean and Darin share a drink with practically everyone who walks in the door and still somehow manage to wake up the next day for jobs as ski instructors. One of their favourite tricks – collecting footage of punters on the slopes to run back at the bar in the evening. Make sure to warm up the vocal chords before stopping by, the karaoke’s cut-throat, with a €40 bar tab to the best singer or act.

Pint: €4 | Grab a Derby sticker at the bottom of the mountain and your first beer/wine’s only €1. 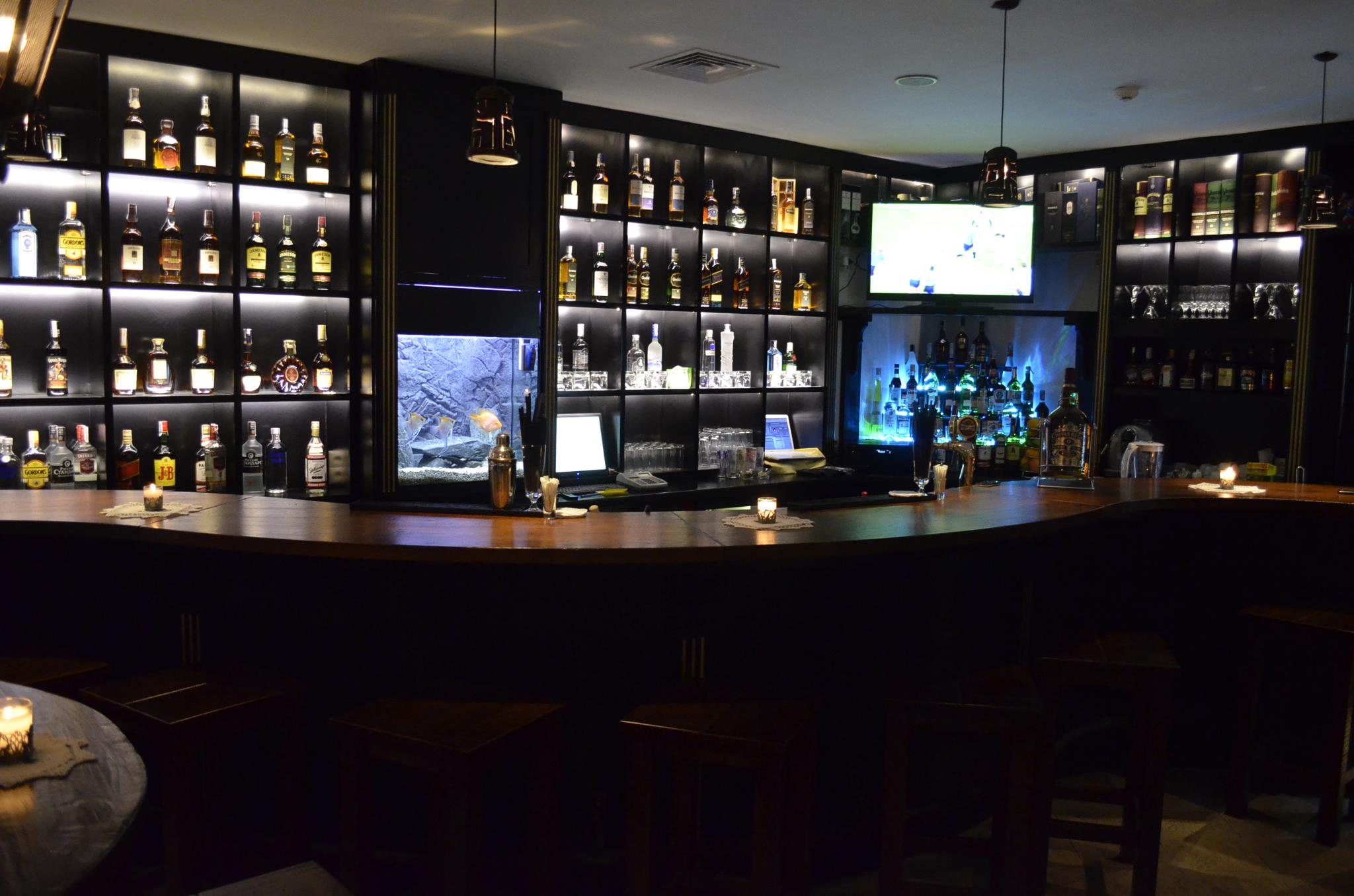 There’s nothing that whisky and butter can’t cure – famously succulent steaks of imported Irish beef join rich, hearty puddings and Brian’s absolutely smashing collection of whiskies at the Irish Harp. Worry not if you’re more about the beer, they’ve sourced some of the finest in Bulgaria – “it’s as good as Dublin beer” says Brian, and we’re inclined to agree. This year, Irish singer Jamie McDonald’s playing from 4:30pm, with Lizard taking to the stage later on – it’s going to be a good ‘un! 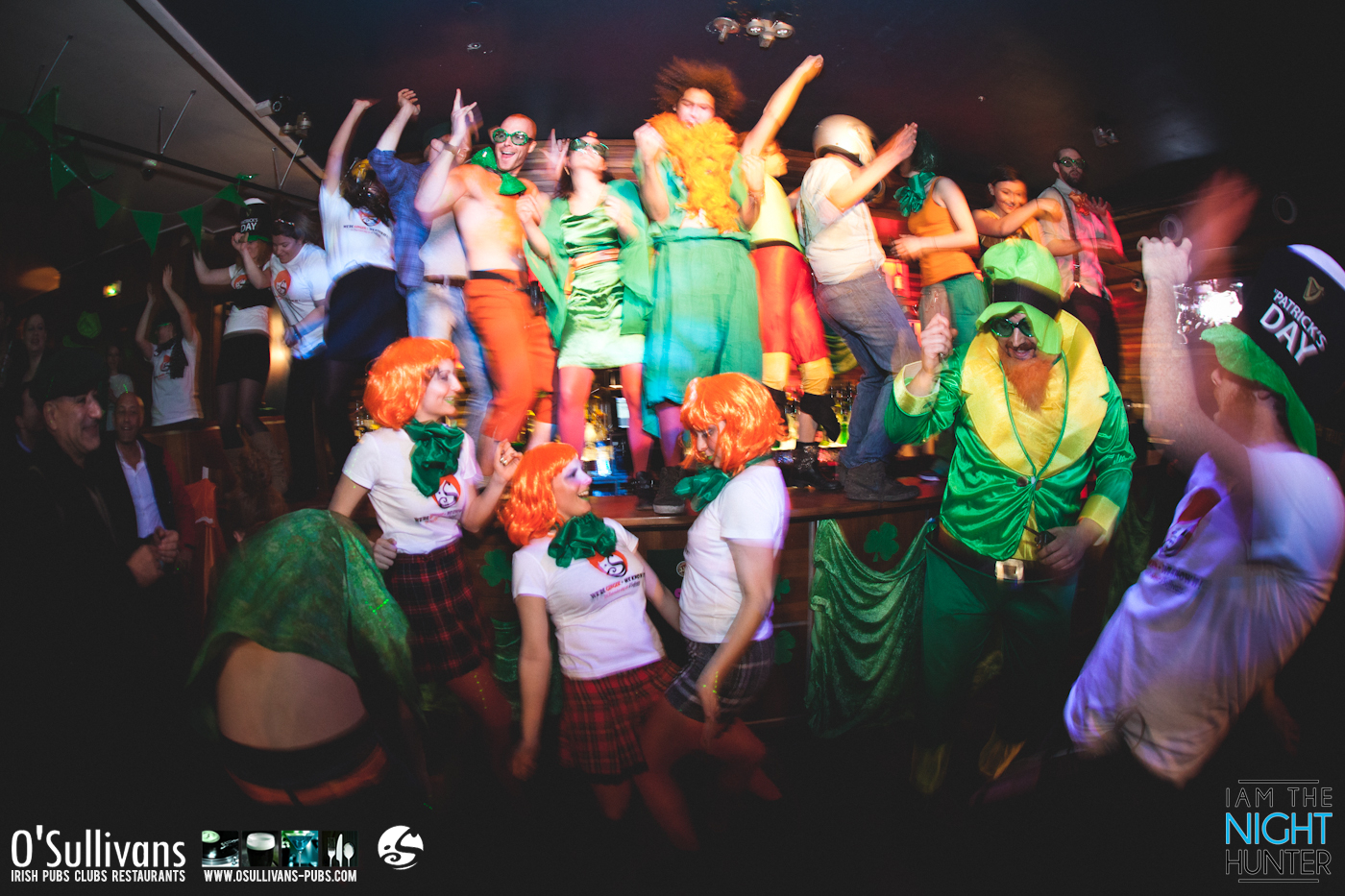 “Here’s to being single, drinking doubles and seeing triples” is pretty much the life motto of O’ Sullivans. What was once Dick’s T Bar has been revamped for a new club-like approach to Irish boozing. A pleasingly chaotic atmosphere is given Irish flavour with free shots for anyone in green on the big day, plus special deals on Guinness, Jameson shots and an appearance from Irish band, The Elements, alongside the resident DJ.