It’s Russian Christmas today, and it’s turning out to be a rather white one. There have been heavy dumps of white stuff in certain parts of the Alps this week, with the high French resorts, Austria’s Arlberg region and some ski areas in Switzerland being very much in the Snow God’s favour. Avalanche risk is high, and it’s rather cloudy out there – but runs are open, lifts are chugging and snow lovers are having a grand old time on the piste. Check out what ten of our favourite resorts looked like today: 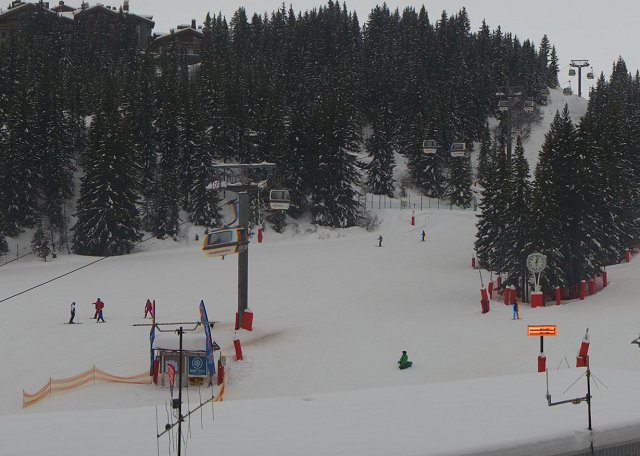 Courch’s conditions are celebrating Russian Christmas in seriously snowy style. This is the Croisette area – there’s currently 78cm of snow in resort, with 140cm recorded at the top of the slopes at 3000m. It’s due to snow more over the weekend, with the freezing level hovering around 1900-2000m. 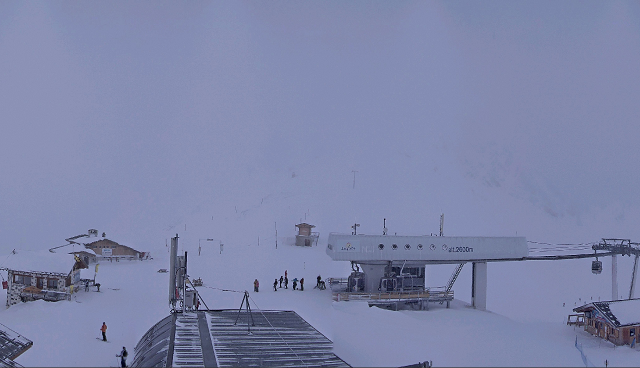 Things are looking VERY white in the Arcabulle area up at 2600m – the usually glorious views of Mt Blanc have been swapped for a cloudier panorama, but as long as they bring oodles of white stuff you won’t hear us complaining. There’s 165cm of snow at the summit, with 80cm down in resort. The avalanche warning’s far too high to venture off piste, but with 77 slopes open there’s more than enough Paradiski corduroy to ski. 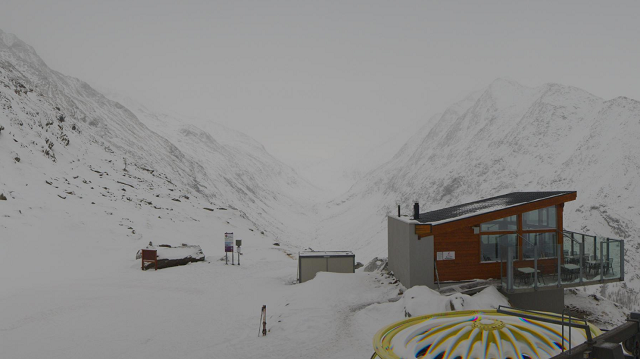 80% of the lifts are open in Saas today, and the top snow depth on the Allalin has reached an impressive 160cm (in the village you’ll find a good 40cm dusting). It’s due to snow this evening and into tomorrow, with the sun forecast to peep above the clouds on Saturday afternoon.

Good news for skiers in Crans – the snow depths of 150cm on the Plaine-Morte glacier and 50cm in the villages look set to increase over the next week. More cover’s predicted on Les Violettes and the glacier tomorrow, and if the temperature drops as expected on Sunday, the flakes should start falling back at base too. 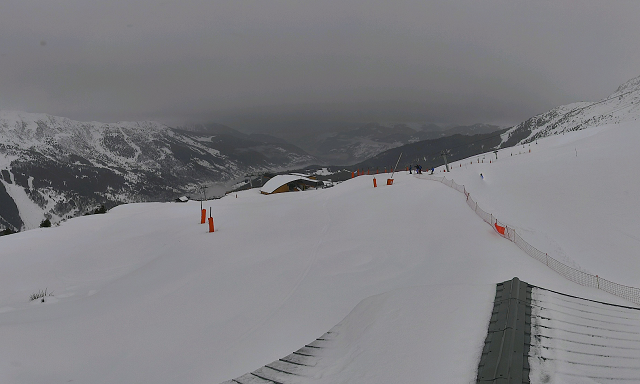 50 of Meribel’s 63 trails are skiable today, which isn’t bad going at all, and snow’s expected to fall from 1900m tomorrow. Skiers are sliding on a base of 145cm up top, and there’s 83cm down in resort. This was the Versant Saulire webcam earlier on which has seen 5cm of fresh snow so far today. 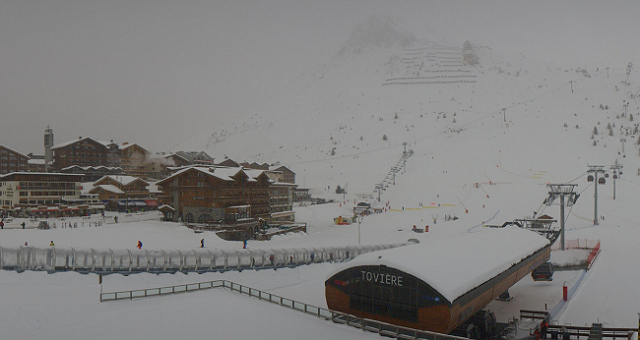 This was Le Lac at lunchtime today. There’s 140cm of snow at the summit, and 84cm in resort, with the 54 open runs in between being a hive of skiing activity. 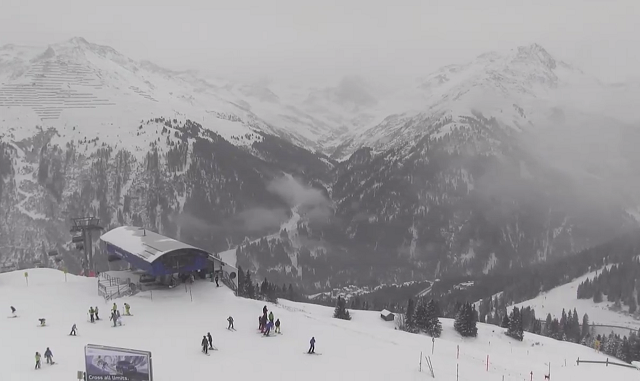 A snowy shot of the Gampen area – a slice of the 181km of pistes that are skiable today (with 81 lifts whisking you up to them). Records show a 44cm base in resort, and 100cm higher up and conditions are described as ‘powder snow’ – hurrah! A mix of rain and snow seem to be the order of the day tomorrow, but from Sunday it looks like there’ll be a lot more snowflakes than raindrops. 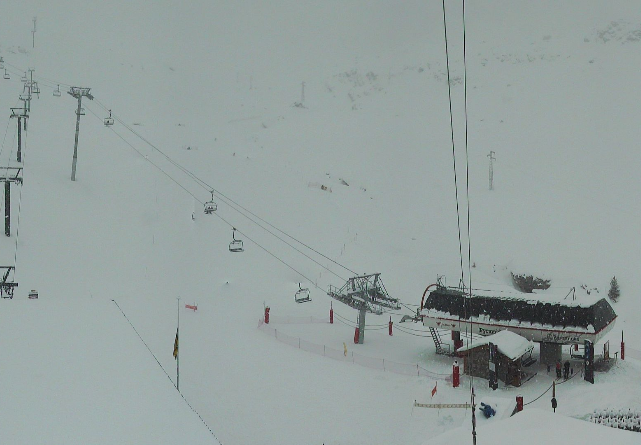 You can sample the powder snow on 42 open slopes in Val d’Isere today, thanks to 140cm of white stuff up at 3000m, and a decent 85cm down in resort. They’re expecting another 10cm before the day’s out, and another 20cm is forecast for Saturday over 1600m. 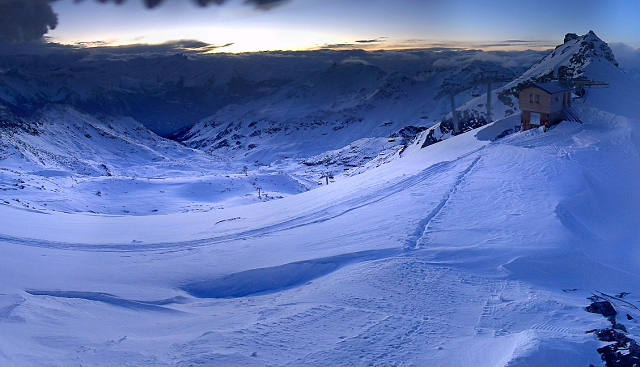 There’s a whopping 105cm of snow at resort level in VT – one of the perks of it being the highest in Europe. The views are another bonus, with the Tyrolienne webcam capturing this earlier today. You’ll find more snow higher up, with levels reaching 140cm at the summit. All of the lifts are running, and you can ski 67 of the 80 trails. 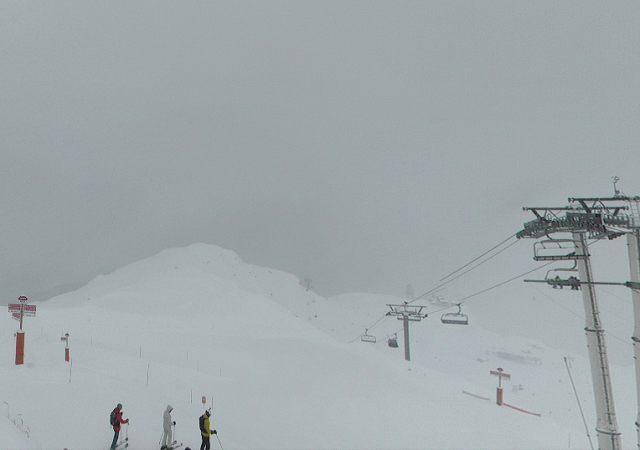 Mother Nature’s keeping Verbier cool and white at the moment – especially higher up. This is the Fontanay webcam, showing one of 27 running lifts and 26 open pistes. There are records of 100cm up at Les Gentianes and 25cm in resort and next week looks set to be a snowy one.

If you’re tempted by a ski trip before half term, we have some huge discounts of up to 60% off on our last minute deals.