West Brompton became ‘the home of the beanie’ last week, when I joined SNO lovers from all over the globe for The Telegraph Ski and Snowboard Show.

Walking around without buying anything was like being at Borough Market on a 5:2 fasting day. I wanted it all. Everything. Could I sell my grandma for a Go Pro? Perhaps not.

Luckily the show isn’t all about pining after ski gadgets, which I found as we gathered around the ski slope, where Britain’s youngest and most promising freestylers were doing their thing. One of the athletes was 9 year old Bradley Fry, who won the U12’s English Slopestyle Championships and Scottish Indoor Slopestyle Championships earlier this year. He was almost too good on the rails (superhuman? Perhaps – but one to watch out for).

The best was yet to come. As I wandered away reflecting on the freestyle champion I could have been, the sound of cheering lead me to a Q&A session. No big deal – only Graham Bell and my absolute hero: Olympic superstar (and all-round legend) Jenny Jones. Naturally, I fought my way to the front like a true fangirl… Jenny has a down to earth way of public speaking and I felt like (maybe daydreamed) we were chilling in my kitchen as she chatted about training, motivations and the SnowCamps charity.

I admit to shamelessly barging my way to the front to see that Sochi medal up close and even got a cheeky snap with her. If anyone asks, we had a half hour chat about our shared talents in world-class snowboarding… obviously. 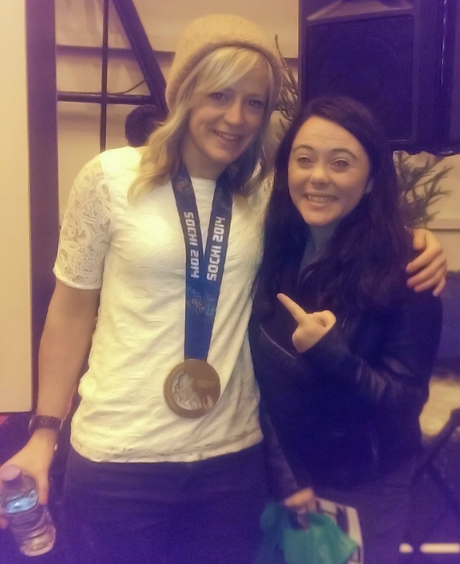